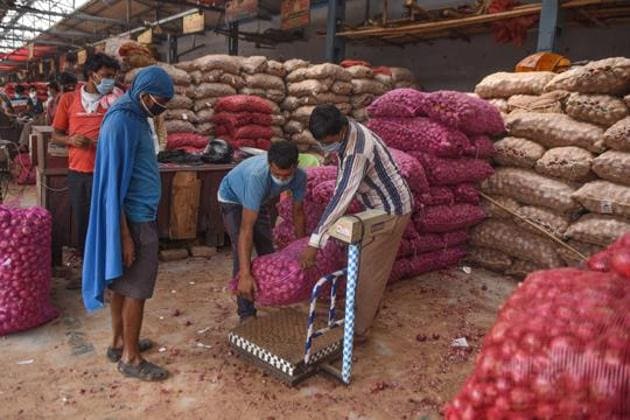 A key question that has not been answered by the government is this: If the government was indeed keen on retaining the MSP system and assuring MSP to the farmers, why is it not stated explicitly in the new laws.(Sanchit Khanna/HT PHOTO)

Should India’s farmers have the economic freedom to market their produce to whoever and wherever they want at an agreed price? Unequivocally yes. Will the government’s recently-legislated farm bills grant this freedom to farmers? The answer is an unequivocal no.

Let us understand this through the example of Prashant Gawande, a small farmer in Akola, Maharashtra, with a three-acre farm. He has just harvested soyabean and needs to sell his produce quickly so as to repay the debt taken to produce the crop. The nearest Agriculture Produce Market Committee (APMC) market yard for Gawande is 25 km away where licenced traders will bid for his produce, starting with the Minimum Support Price (MSP) declared by the government. He can sell his produce to the highest bidder — whether a government procurement agency or a private trader — and collect his money.

Ninety-four per cent of India’s farmers sell their produce for non-MSP prices. Official data disclosed in Parliament showed that, in the last season, only 1.24 crore paddy farmers and 44 lakh wheat farmers got the MSP. The reason is that farmers do not have an ecosystem with multiple, easily accessible and competitive markets. The painful conclusion is that, notwithstanding the operation of APMC Acts for a few decades, only a fraction of the farmers get MSP.

The Bharatiya Janata Party government has passed new farm sector laws which it claims will establish a “One Nation, One Market” for agriculture produce and liberate farmers. “One Market” is a myth.

Can you imagine Gawande in Maharashtra loading his soyabean crop onto a tractor and driving to Madhya Pradesh because he has learned that he can get a better price there! Or imagine Gawande pulling out his computer, log into the e-commerce market place, and complete a digital sale and purchase!! Neither the current APMC system nor the “One Nation, One Market” dream will serve the small farmer.

Eighty-five per cent of farmers are small farmers, holding one hectare or less and with little surplus to sell in the market. He/she can be lured to a market only if there are, multiple, easily accessible and competitive markets in the area where the farmer produces his/her crop.

Under the new laws, anyone can now operate outside the auspices of APMC and procure from farmers without the need for a licence or payment of a fee. Most traders will then abandon APMC and set up their own informal markets outside to avoid APMC transaction costs and regulations. Lack of activity will eventually lead to the shutdown of APMCs which means that the bidding process to establish the highest price for the produce will also vanish. Independent traders will collude to set up many fragmented thin markets for procurement which will lead to price gouging of farmers, most of whom are small and do not have collective bargaining powers. This is how the APMC and MSP systems will be slowly dismantled.

When the MSP system is dismantled, farmers lose a very important price signal that can help them get better prices. The experience of Bihar after the Nitish Kumar government repealed the state’s APMC Act bears out this apprehension. Bihar farmers get a whopping 30% less as the price for their produce than the notified MSPs.

If the government was indeed keen on retaining the MSP system, as it claims, then why is it not so stated explicitly in the new laws? Nothing would have been easier than to add a clause that a private transaction would be valid only if the price paid “is not less than the MSP”. MSPs play a vital role as an emitter of a price signal. The farmers face a real risk of exploitative prices without a proper price signal and an assured market place to sell their produce. Today, farmers neither have access to multiple markets nor the bargaining power to negotiate fair-price contracts.

Farmers have seen through the falsity of the government’s propaganda and that is why farmers across the country are on the streets protesting against these laws.

The objective to provide economic freedom to farmers through more choices of buyers is a laudable pursuit that the Congress supports fully. Farmers such as Gawande can be liberated only when they have access to multiple markets where different buyers compete for their produce and offer the highest price.

Renowned agriculture expert Dr MS Swaminathan and scholars such as Sudha Narayanan and Mekhala Krishnamurthy have argued that the number of APMC market yards per square km is inadequate and severely inhibits market access for India’s farmers. Recognising the severe limitations of the APMC system, the Congress party’s manifesto for the 2019 elections clearly laid out the need to establish thousands of markets “in large villages and small towns with adequate infrastructure and support” as a pre-condition to free trade in agriculture procurement. The key word is markets, not One Market.

Six years of the Narendra Modi government has revealed one clear pattern of governance — to confuse and conflate lofty goals and objectives with ill-thought-out policy execution. Eliminating black money was a lofty objective; but demonetisation as a policy to achieve that was disastrous. Ease of inter-state trade was a laudable goal; a plethora of Goods and Services Tax (GST) rates was not the way to achieve it.

Flattening the Covid-19 curve was a worthy pursuit, but a draconian lockdown was imprudent. Similarly, giving economic freedom to our farmers is a desirable goal, but the hastily-passed farm laws will not help achieve this.

P Chidambaram is a Member of Parliament and the former finance minister. Praveen Chakravarty is a political economist and a senior office bearer of the Congress