Who in India is profitting from Russian oil? Not the common man but private companies 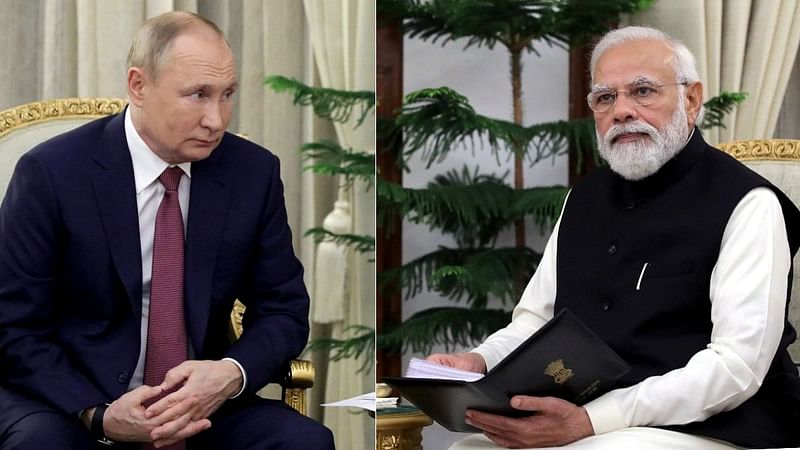 There is a parallel strategic war to the Russia-Ukraine war that is underway. This strategic war between the western bloc of nations and Russia is like a game of chess, where the western nations want to debilitate Russia’s resources to fight Ukraine but they are also trying to minimise the risks arising out of dependency on Russian oil for the world. The world needs Russia’s oil. And Russia needs money from its oil to fight the war. But the world does not want to give Russia the money it needs. How does one resolve this quandary in the short term? That is the strategic war.

Starting today, the US, Canada, Australia, United Kingdom and 27 countries of the European Union have entered into an agreement to impose a price cap on Russian oil. They have resolved to not buy or provide the necessary insurance and maritime services to transport Russian oil at prices above $60 per barrel. In economic terms, they have formed a buyer’s cartel to reduce prices of Russian oil, ostensibly to cripple Russia’s ability to continue its aggression in Ukraine.

Nearly half of Russia’s annual revenues comes from oil, making it extremely dependent on oil trade. An outright ban on Russian oil will result in skyrocketing oil prices that adversely impacts the whole world. So, the western bloc of nations hit upon a buyer’s cartel idea to allow Russia to sell its oil —to avoid a global oil shock — but at the same time, minimise its revenues to handicap Russia’s war efforts. Oil from Russia needs to be transported to other nations for which, its needs maritime transportation and insurance services, which is provided almost exclusively by western nations. The western bloc devised a plan to leverage its dominance of the oil shipment industry to impose a maximum price at which other nations can buy oil from Russia. Which means, the private companies in the western countries that provide these shipment services are now bound by government diktats. This effective ‘nationalisation’ of companies militates against the western dogma of private enterprise. Yet, this convoluted, complex and somewhat irrational proposal conceived by the western nations is reflective of their ‘whatever it takes’ attitude to impair Russia’s war in Ukraine and prevent deaths and damage.

Amid all this, India has been a prolific buyer of Russian oil ever since the war in Ukraine started. Making Russia its biggest supplier of oil, India buys 10 times more oil than it did before the war. According to Directorate General of Commercial Intelligence and Statistics, Ministry of Commerce and Industry, India has paid Russia nearly $20 billion for oil in just seven months from April to October, more than what it paid in the last ten years combined. The western nations seem helplessly enraged at India’s hypocrisy of making platitudinal remarks against Russia, for engaging in a war while also financing it. India claims that it is in the nation’s interest to take advantage of cheaper Russian oil and buy large quantities.

When India claims it is buying cheaper Russian oil in the nation’s interests, one would expect the people of India to benefit from it. For the average Indian, the price of petrol or diesel has remained unchanged. The price of diesel in Delhi before the war started was Rs 87 and the current price is Rs 90. The government may argue that the prices have not increased for the common man due to cheaper Russian oil. That is a half-truth.

Reliance Industries, Nayara Energy and others

It is important to ask who in India is buying Russian oil. Nearly three-quarters of cheap Russian oil is bought by private refiners, Reliance Industries and Russian controlled Nayara Energy. These companies buy the cheaper oil, refine it and sell it back at a big markup to European nations. Nearly one-third of Reliance’s crude oil purchase is now from Russia, which was only at 5 per cent before the war began. This also means that public sector refiners such as Indian Oil Corporation, Bharat Petroleum and Hindustan Petroleum are getting only a small share of the Russian oil. But these public refiners are the ones that supply more than 90 per cent of the average Indian’s fuel needs. So, the companies that refine and export to other nations garner the bulk of cheaper Russian oil imports vis-à-vis companies that supply fuel to the common man. It is no surprise that the average Indian has not been able to reap the benefits of cheaper Russian oil imports while private refiners are reaping record profits.

India’s purchase of discounted Russian oil is cloaked in sovereign and nationalistic undertones. India, the nation and Indian private companies are not the same and are deliberately conflated in this issue. This confusion was at its best display in a much-watched CNN interview of the Minister of Petroleum and Natural Gas Hardeep Puri. He fumbled first saying ‘I buy Russian oil’, implying the government or the sovereign and when pushed back by the interviewer, he back tracked to say ‘private companies buy Russian oil’. The government also imposed a ‘windfall gains’ tax on private companies that allegedly made huge export gains from crude oil refining. But a complex tax on a share of profit does not explain why these companies profited at the expense of the sovereign in the first place. Isn’t it better for billions of Indians to have access to cheaper petrol and diesel than a few thousand crores in tax revenues for the government? The slippery tale in this Russian oil trade is how two private companies that did not buy much Russian crude before the war suddenly cornered three-quarters of it at discounted price.

If the new price cap regime works well, India’s private refiners stand to gain even more since it will further lower the prices of Russian oil. India’s private refiners are in a cushy ‘heads I win, tails you lose’ situation. In essence, India has provided Russia with $20 billion for its war efforts in return, not for lower oil prices for the average Indian but for higher profits of a few companies, albeit a token windfall tax. In this context, it is both faux nationalism and a blatant lie to justify India’s enablement of Russia’s war in Ukraine using a patriotic alibi. In reality, it is only helping a few Indian private companies dance on the graves of Ukrainians.