A road map to fight the inflation stress

The Centre must reduce fuel taxes, increase subsidies, and desist from raising indirect taxes. The only way to fund the extra expense will be to find additional revenue streams 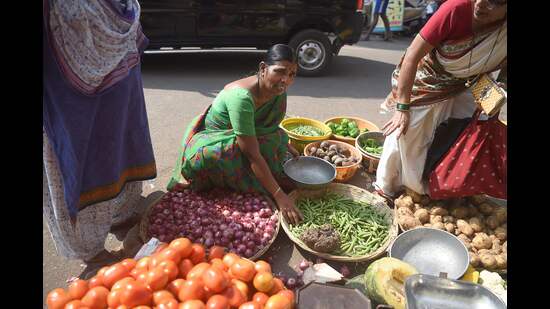 Of all the economic woes, inflation pinches people every day; hence, this is the most important economic issue to address on a war footing. (AFP)

It is well recognised that India’s economy, like that of other developing nations, is precariously perched with a falling currency, rising inflation, fleeing foreign investors, weakening trade, and a deteriorating fiscal situation. But, unlike others, India has large foreign reserves, low foreign debt, and a stable political environment. Ideally, we should lower prices for people, steady the rupee, control the fiscal deficit and grow the economy. But that would be an impossible quartet and, in British politician Rishi Sunak’s words, “fantasy economics.”

Of all the economic woes, inflation pinches people every day; hence, this is the most important economic issue to address on a war footing. The steep rise in consumer prices is driven predominantly by rising oil prices and the falling rupee. In the past, finance minister (FM) Nirmala Sitharaman never missed an opportunity to unabashedly claim credit for keeping inflation low, even though it was primarily driven by record low international oil prices. Nevertheless, we acknowledge India has no control over rising global oil prices that are driving inflation up now. But the government can ease the pain for the common people by reducing taxes and cesses on fuel to not just keep fuel prices constant, but lower them. Recall, the Union government has, so far, collected fuel taxes to the tune of roughly ₹1 lakh from every family over the past eight years. So, it is time for some payback by cutting excise duties and cesses when oil prices have reversed. This is the most effective and immediate way of alleviating inflation stress for the average person rather than other methods such as buying cheap Russian oil, which can be a rupee wise–rouble foolish strategy.

The other important cause of inflation is the dramatic depreciation of the rupee against the dollar. Due to India’s import dependence for oil, fertilisers and other goods, a falling rupee also means imported inflation. Therefore, efforts to stem the rupee’s fall can help curb inflation and reduce volatility. This is the only credible economic argument for a stronger rupee and not some absurd strong rupee equals strong nation nationalistic rhetoric.

The mainstream economists’ view seems to be to let the rupee fall to market levels, but the government wants Reserve Bank of India (RBI) to stop the fall. Atypically, the RBI announced its intent to use up to $100 billion of foreign exchange reserves to stem the rupee’s fall, perhaps as a signal to currency speculators. While a weak rupee is good for exports, given the gloomy economic outlook and a likely global recession, demand for Indian exports may be tepid. On balance, the government may be correct to want to support the rupee beyond a certain low level to assuage importers and investors, even at the cost of using up some forex reserves.

The proverbial elephant in the room is the shaky fiscal situation. It is now evident that the expenditure plan presented in the 2022-23 Budget will be exceeded. The subsidy bill will inevitably overshoot the planned budget with sudden spikes in fuel, fertiliser, and food prices. Add to this an increase in Mahatma Gandhi National Rural Employment Guarantee Scheme (MGNREGS) expenditure due to a relentless demand for minimum wage work and a cut in fuel taxes, and there is likely to be an increase of 10% over the original expenditure budget.

The government is right to be reticent about increasing such revenue expenditure while also seeking to maintain planned capital expenditure. But it will be foolhardy and disastrous not to loosen the tax, subsidy, and MGNREGS purse strings for hundreds of millions of people at such a difficult time. So, the only option for the Centre is to chase extra revenues.

Recall that in September 2019, the FM announced an off-budget corporate tax cut. The Budget documents reveal the effective tax rate paid by corporates fell from 28% in FY2019 to 23%, costing the government more than ₹1 lakh crore in lost revenues. This tax cut doubled the profits of these large corporations and tripled their stock market value but yielded no new investment or jobs. Rather than a Goods and Services Tax (GST) rate hike to raise additional revenues from a billion Indians at a time of high inflation, a rollback of the 2019 tax cut for a few corporations will garner revenues equivalent to 3-5% of budget expenditure. Roughly, only a quarter of the Modi government’s tax revenues are collected from corporates while 42% are collected from all Indians through indirect taxes, which is the exact reverse of the ratio in 2010. Measures such as a windfall oil tax, as the government has done, and perhaps imposing a ‘Tobin” tax on financial market transactions can generate more revenues without adversely impacting the larger economy.

In effect, cutting fuel taxes, increasing subsidies, and increasing planned capital spending will likely push expenditure by 10% above budget. Rolling back the 2019 corporate tax cut and other new direct taxes can make up for less than half of this increased expenditure. This would still expand the fiscal deficit in absolute terms but not by much as a percentage of nominal Gross Domestic Product (GDP).

India was in a similar macroeconomic situation, though not the same, post the global financial crisis of 2008 and during the “taper tantrum” of 2013. Each time, India exported its way out of the economic tangle, with exports reaching 25% of GDP, which has now fallen to 20%. But the global economy is on the verge of a potential recession, so strong exports may not be an immediate option for India.

Reducing fuel taxes, increasing subsidies, and not raising indirect taxes are not populist but prudent measures at this time. But funding this expenditure partly by encouraging the corporate sector to pay taxes at the same rate as they used to in 2019 is fair and reasonable. Why can’t the Opposition give concrete suggestions than merely criticise is the often heard and perhaps justifiable refrain. Well, this is one small attempt, but will the government listen?