Ushering in a new social contract through Minimum Income Guarantee

The minimum income proposal will strengthen the State’s ability to deliver on its promise of a guaranteed basic standard of living for every poor Indian family. 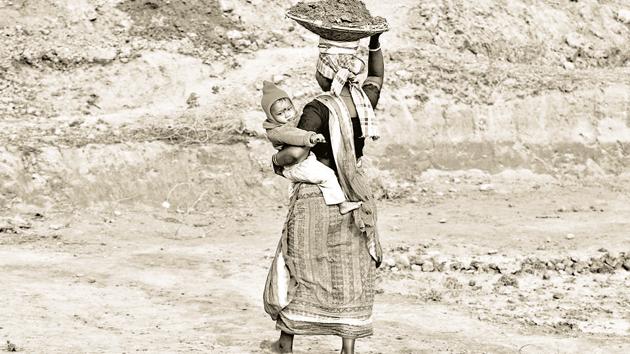 The minimum income proposal will not absolve the State of its core responsibilities of providing food, education and healthcare to the poor.(REUTERS)

In 1938, the Indian National Congress held its 51st session at Haripura in Gujarat. Subash Chandra Bose was elected president of the Congress party in this session. In his presidential address, Bose said “I have no doubt in my mind that our chief national problems are the eradication of poverty, illiteracy and disease”. To achieve this, he first set up a national planning committee under the chairmanship of Jawaharlal Nehru to draft a plan to ensure a basic minimum standard of living for every Indian family. The average Indian family’s monthly income in 1938 was ₹25.

Today, the average Indian family’s monthly income is roughly ₹50,000, a 2,000 times increase since 1938. It is undeniable that India has made remarkable strides in uplifting hundreds of millions of citizens above poverty in the last seven decades.

While the Indian economy continues to grow, the much touted trickle down impact of economic development seems elusive to the poorer sections of our society. There is a real risk of the bottom quarter of Indian families being left behind completely. The only way to ensure that these poorest sections do not remain permanently stuck in an abyss is to guarantee them a certain minimum basic income. The plan to ensure a basic minimum standard of living for every Indian family that was envisaged by Bose in 1938 is applicable even today.

Ever since the president of the Congress party, Rahul Gandhi, announced the Minimum Income Guarantee idea, there has been an outburst of commentary discussing and debating the idea, many welcoming the move, some opposing it. Such a debate is welcome.

The idea that there must be a certain minimum basis for self-respect in society is not a new idea. It dates back to 18th century thinkers such as Thomas Paine and John Stuart Mill. Throughout contemporary history, most major democracies have executed their social contracts through in-kind welfare programmes of food, living, education and health care for their citizens. This has been spectacularly successful in ensuring a certain minimum standard of living for hundreds of millions of poor across the globe.

But it has also reached the point of diminishing marginal utility. Any new in-kind welfare programme does not deliver the same level of utility to the poor as it used to, at much lower levels of poverty. Yet, the risk of contemporary economic development models that accrue disproportionate gains to a select few at the top and leave behind large sections of society is very high. There is now also a fierce need for a certain minimum level of empowerment and economic freedom for all citizens in a society.

The chief concern about this proposal is that of the State abdicating its responsibilities of providing basic necessities of food, education and shelter to the poor in lieu of providing cash. The minimum income proposal will not absolve the State of its core responsibilities of providing food, education and health care for the poor. It will strengthen the State’s ability to deliver on its promise of a guaranteed minimum standard of living for every poor Indian family.

The other touted fear of this proposal is its ability to act as a disincentive to work. There is ample empirical evidence across the world that shows how a basic income to ensure a safety net does not act as a disincentive to work. It is a bit far-fetched to argue that in a developing country like India, young people will curtail their aspirations and be satisfied with a hand-to-mouth living that a basic minimum income is designed to provide.

Eight decades after the original proposal of the Indian National Congress, the Congress is committed to ushering in a new social contract in the form of a Minimum Income Guarantee for every poor family in India.