Economy Down, Stock Market Up; Why This Dissonance?

India imposed a total and extreme lockdown to fight the Covid-19 epidemic. It was among the harshest and the longest in the world. Businesses, factories, shops, markets were all shut. Economic activity was at its lowest levels in many decades. Starting June, India slowly started to unlock but it was certainly not back to normal. The expectation among economists is that India’s economy will shrink and GDP growth will be negative for this year.

This has not happened in 50 years. There is doom and gloom all around.

But not in the stock markets.

In June, India’s stock markets were among the best-performing markets in the world. The BSE Sensex was up nearly 8%.

The average Indian seems bewildered and puzzled at the stock market behaviour.

How is it possible that the stock market is behaving like it is festival time when the entire nation is in mourning over the economy?

Many common citizens, that are not financially savvy investors, have asked me for an explanation of the stock markets.

Stock markets don’t take up too much of my mindspace usually but with so many people asking, I felt the urge to glean some explanation, if I could. So I spoke to a lot of financial analysts, investors, market economists, most of whom believed that excess liquidity caused by monetary and fiscal responses to Covid-19 was finding its way to asset markets, a’la Ben Bernanke’s ‘savings glut’ explanation for asset price inflation during the dotcom boom.

I also looked at some of the standard stock market data from stock exchanges and depositories. While it revealed no clear answers it did throw up some very interesting and curious findings. So, I decided to highlight some of these findings in a simple manner for the average non-financial citizen.

It turns out that the delivery percentage for June in India’s stock markets was very low. That is, speculation in June was very high.

In fact, measured as delivery percentage, speculation level in June in India’s stock markets was the highest in 15 years.

It was higher than even during the time of the great financial crisis of 2008.

Now that we know that speculation levels were very high in June, the next question is who was speculating so much? Was it promoters driving their own stock prices up or banks putting their excess money in stock markets or was it mutual funds or was it foreign money?

At a time when the global economy is reeling under the pandemic and economic activity in India is among the worst affected due to the extreme nature of the lockdown, when domestic investors are withdrawing their money, why did foreign investors pour so much money into India’s stock markets?

Is this surge in foreign money due to one-time or special investments in the month of June (the Jio investment by foreign investors is not accounted in this) or is it speculative money? We do not know but it merits closer analysis. 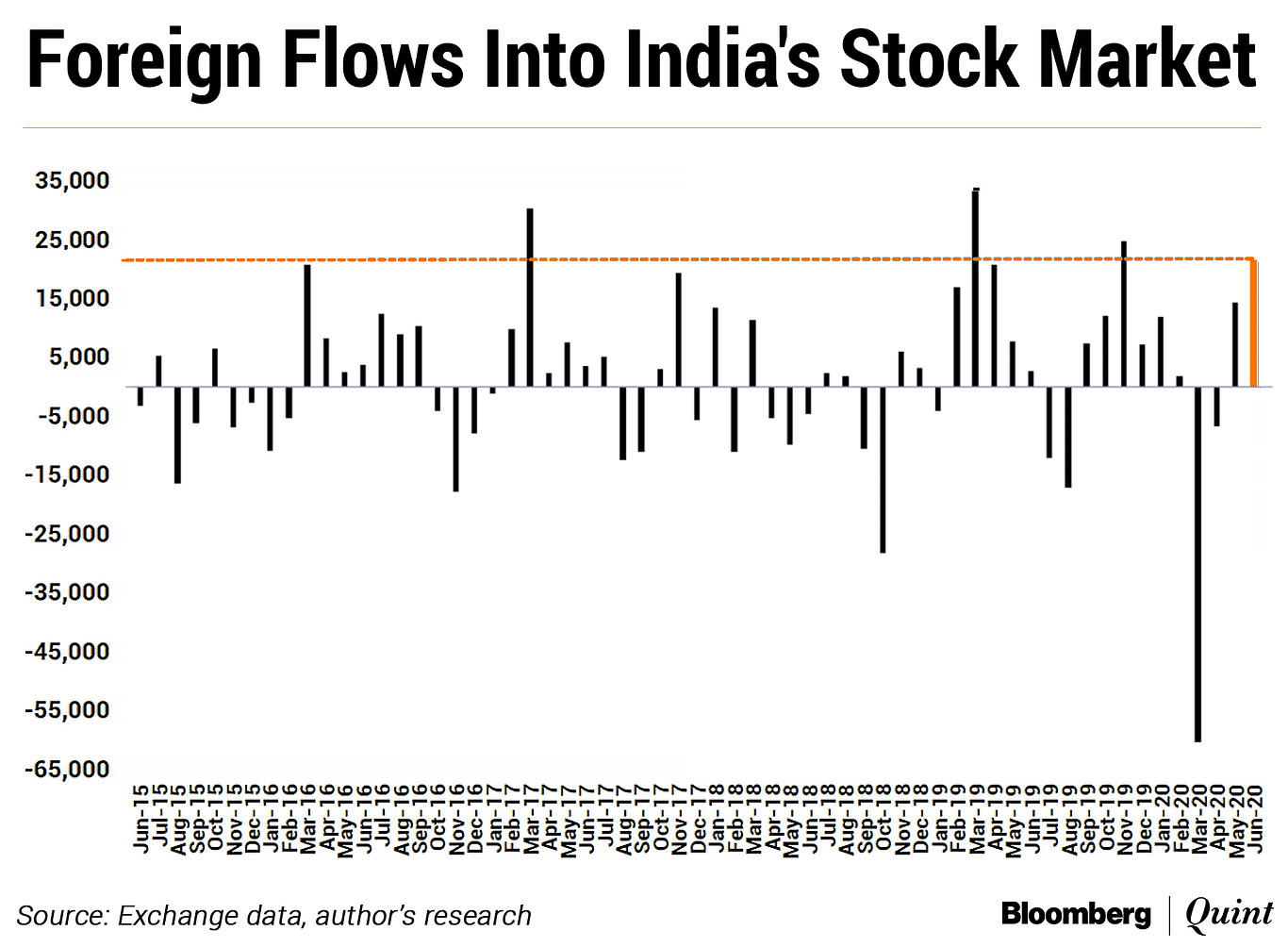 So, here is what the data tells us clearly. 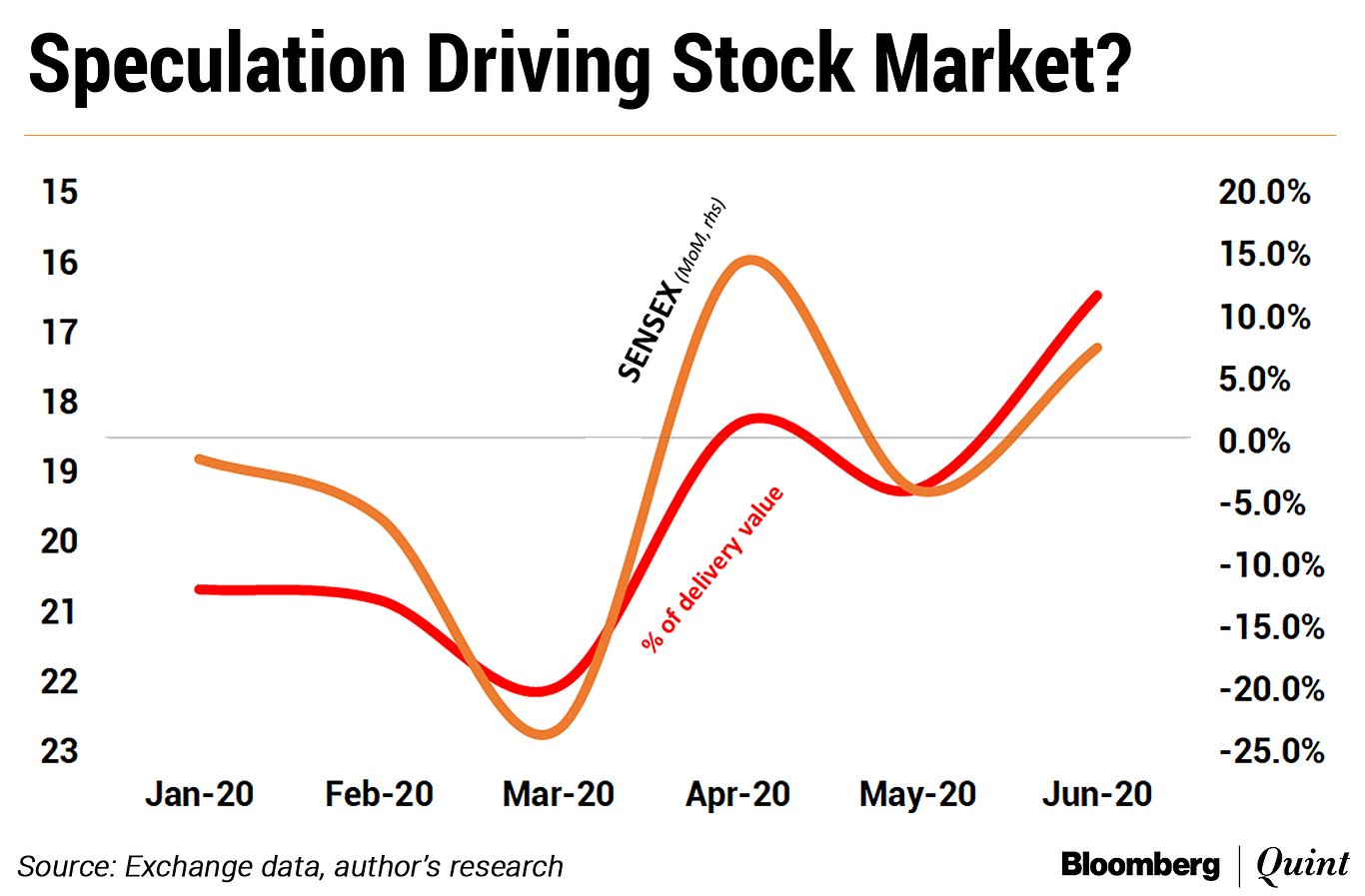 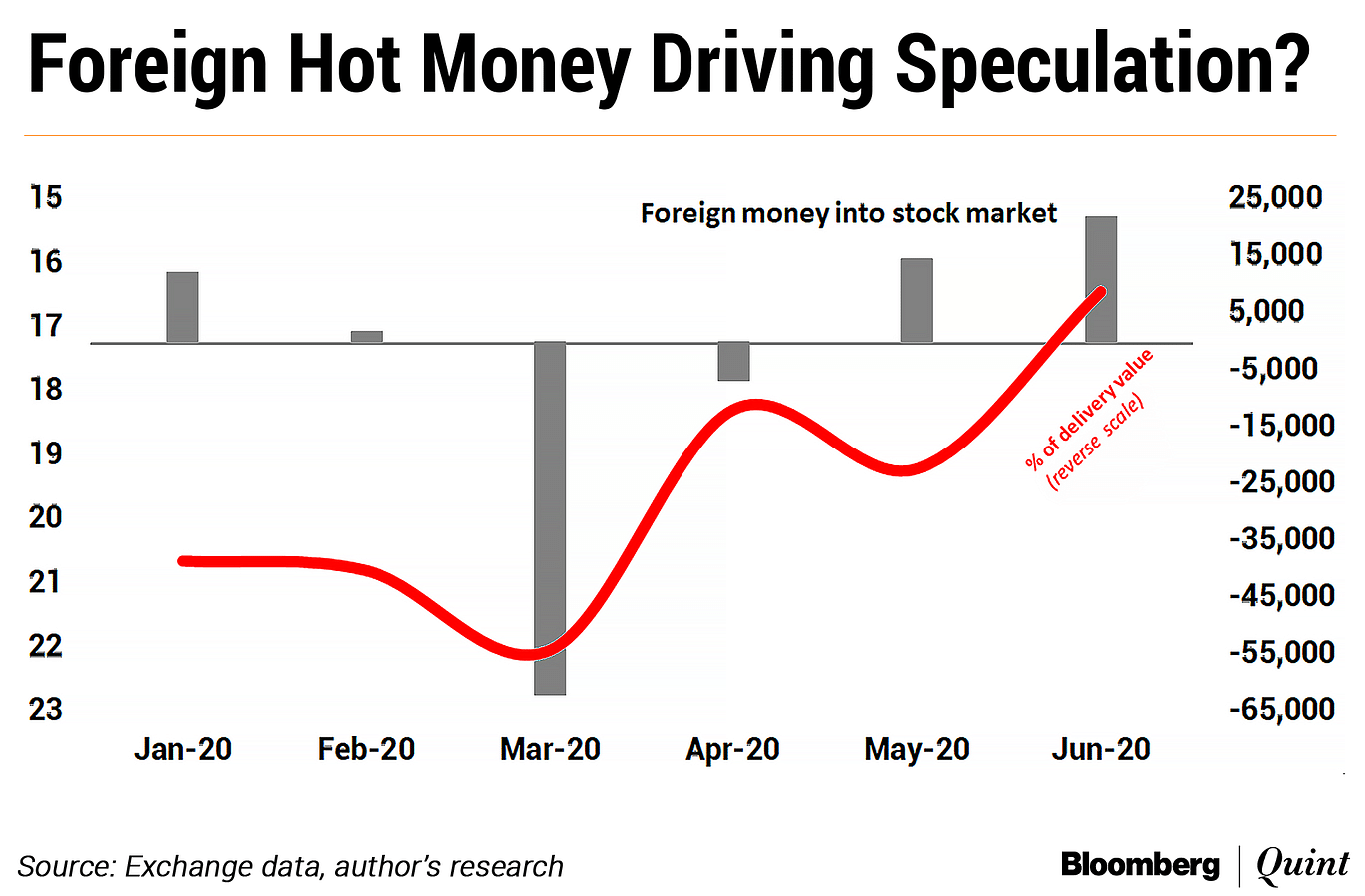 It is then natural to ask the question – Is the story of India’s stock market rise on account of a gush of foreign hot money speculating in the stock markets, or are these three data points mere coincidences, which could also well be the case.

The answer is not clear, but the circumstances certainly call for a closer investigation by stock exchanges and the regulator.

Praveen Chakravarty is a Political Economist, and Chairperson – Data Analytics in the Indian National Congress.