Whatever The Electoral System, BJP The Victor 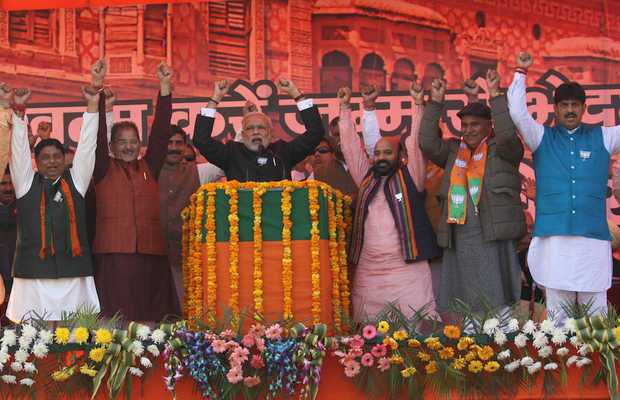 A column on this website said that the BJP’s thumping electoral triumphs of 2014 were on the back of a few percentage points of vote-gain, and it was India’s controversial first-past-the-post electoral system that catalysed these victories.

Would a different electoral system have produced different results, and is there a pattern over multiple elections of the current system disproportionately impacting one party vis-a-vis others?

With the sole intention to observe any trends over time, this analysis below shows how many seats two major national alliances would have won under different electoral systems in the four Lok Sabha elections since 1999. Data for each constituency across all 543 constituencies were analysed and aggregated for each state to calculate the seats won.

The four most common electoral systems across the world are:

1.First-past-the-post system – The current electoral system in India, in which a simple majority of votes determine winners. 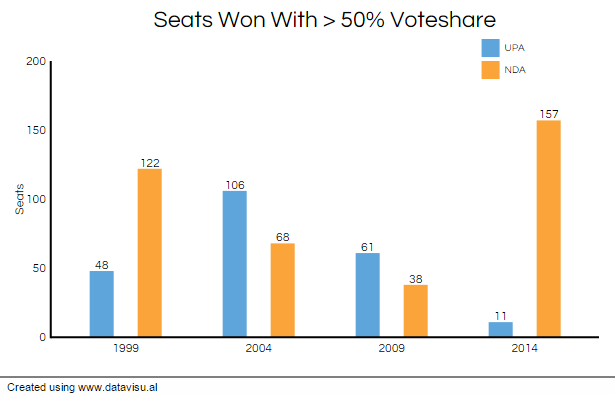 3.Proportional-representation system – Seats are allocated in proportion to votes received by each political party. For example,if BJP won 30% of votes in Uttar Pradesh, it would receive 24 seats (30% of 80) in Uttar Pradesh.

4.Winner-takes-all system in a state – Akin to the US Presidential electoral-college system, if a particular party wins a majority of votes in a particular state, then all seats in that state are allotted to the winning party. For instance, if BJP wins the most number of votes in Uttar Pradesh, BJP gets all 80 seats of Uttar Pradesh. 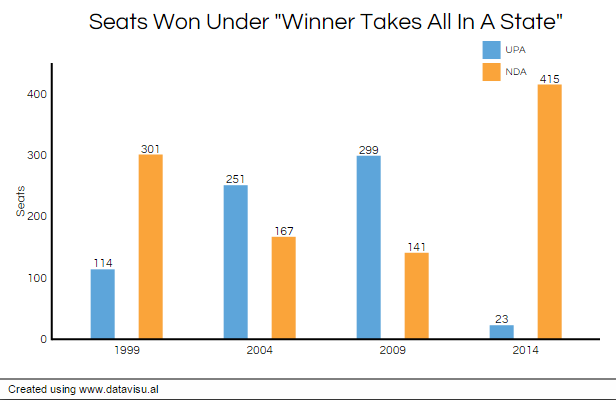 The most important observation from the analysis is that under all the electoral systems in each of the four elections, the victor is the same – NDA in 1999 and 2014, UPA in 2004 and 2009. This lends further credence to the notion that the potential flaws of the current first-past-the-post system are an alibi.

The other observation is that, in general, a majority of the winners in each election secures less than a 50% vote share. But the trend clearly shows that the BJP traditionally wins more of its seats with a greater than 50% vote share than the Congress. On average, the BJP wins 40% of its seats with a clear majority vis-à-vis 30% for the Congress, perhaps an indicator of a higher quality of electoral victory.

The most striking difference is in the proportional vote share system where seats of a particular state are allotted to political parties based on their vote share. The Congress party has a steady sizeable vote share in most states which does not translate into seats in the first-past-the-post system. 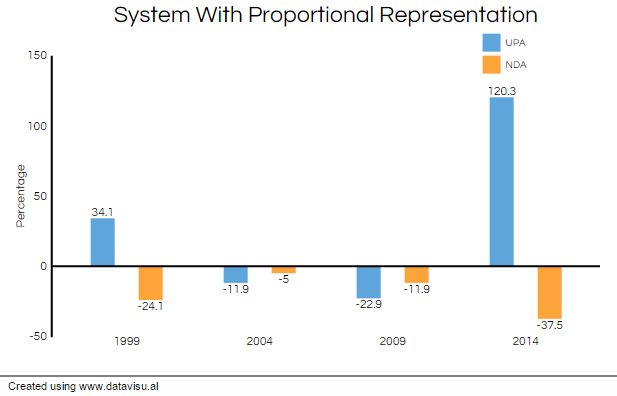 We see from the charts that there is very little that separates the two national parties in their “winnability” under different electoral systems, with the only outlier being the UPA potentially garnering more than double its current tally of seats under the proportional vote-share system in the 2014 elections.

As is abundantly evident from the analysis above, the pertinence of the first-past-the-post system for India is possibly worth a debate. But nothing changes the quality of the BJP’s victory.