Demonetisation: Manmohan Singh To Modi – Time For Politicking Over, Let’s Rebuild The Economy

The impact of demonetisation “on the weaker sections of our society and business is far more damaging than any economic indicator can reveal,” said former Prime Minister of India Manmohan Singh in an interview on the first anniversary of the Narendra Modi government’s move to declare all five-hundred and thousand rupee currency notes invalid.

In a rare interview to Praveen Chakravarty, contributing editor at BloombergQuint, Singh expressed concern regarding the loss of jobs in the small and medium enterprises sector and also emphasised the exacerbating impact that may have on inequality.

…rising inequality has been a constant threat to our nature of economic development. Demonetisation may exacerbate such inequalities which can be harder to rectify in the future. In such a diverse country such as ours, inequality can prove to be a far greater social malaise than in other homogeneous nations. 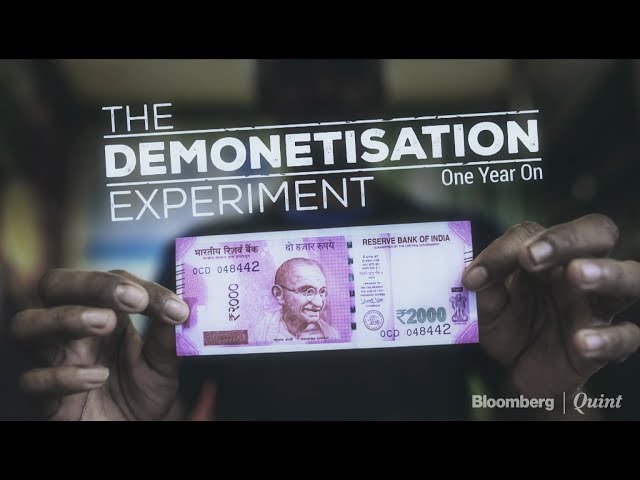 The Modi government has often explained the demonetisation move as an effort to reduce cash-based transactions and nudge the economy towards digital payments. Singh agrees that these objectives are “laudable pursuits”.

But, he adds, “we also need to get our economic priorities right. It is unclear that these goals of cashless economy will indeed help small enterprises become larger and achieve scale efficiencies. That should be our priority”.

The former prime minister, also a noted economist, struck a similar note regarding the need to formalise the Indian economy. Commenting on whether efforts to bring the country’s vast informal economy, by some estimates at 40 percent of gross domestic product, into the tax net via demonetisation and the Goods and Services Tax, Singh said “the means is as important as the ends” and the ends cannot be achieved “through coercion or threats or raids which can be counter-productive”.

he value created by the informal sector will be captured in the form of income, wealth or consumption effects. Hence, we must be cautious about sweeping generalisations about the informal economy and passing moral judgments about the entire sector.

The role of the Reserve Bank of India in facilitating the demonetisation move has also come in for sharp criticism over the past year.

Singh termed demonetisation as “an attack on the independence and credibility of the RBI as an institution” and expressed fears regarding a “creeping culture of erosion of institutions in other spheres” as well.

Singh called on his successor and current Prime Minister Narendra Modi to work towards consensual policy solutions to rebuild the Indian economy.

I strongly feel the time for politicking over demonetisation is over. It is time the Prime Minister graciously acknowledges the blunder and seeks support from all to rebuild our economy. Dr. Singh, it is one year since the government chose to undertake the demonetisation exercise. You were uncharacteristically vocal in your opposition to it back then. How would you now assess the impact it has had?

Demonetisation has proved to be a catastrophic economic policy. The damage it has caused has been multiple fold – economic, social, reputational and institutional. Slowing GDP is merely one indicator of the economic damage. Its impact on the weaker sections of our society and business is far more damaging than any economic indicator can reveal. One immediate manifestation of the damage has been on jobs. Three-quarters of non-agriculture employment in our country is in the small and medium enterprises sector. This sector has been hit the hardest due to demonetisation. Therefore, jobs have been lost and new jobs are not being created.

I also worry about the longer term impact of demonetisation. Headline GDP may well start to show an improvement after the recent lows. But rising inequality has been a constant threat to our nature of economic development. Demonetisation may exacerbate such inequalities which can be harder to rectify in the future. In such a diverse country such as ours, inequality can prove to be a far greater social malaise than in other homogeneous nations.

Demonetisation has also caused reputational damage to India as a peaceful and stable nation for economic policy.

The turmoil was entirely self-inflicted due to a thoughtless policy executed in haste. Overall, demonetisation has turned out to be a monumental blunder indeed.

As India’s only economist Prime Minister, you were remarkably but perhaps not surprisingly prescient about the impact of demonetisation. Do you now feel vindicated about the warnings you had sounded?

No, not at all. This is not about vindication. In fact, I strongly feel the time for politicking over demonetisation is over. It is time the Prime Minister graciously acknowledges the blunder and seeks support from all to rebuild our economy. There come certain moments in a democracy’s history when economics should take precedence over politics. It is one such moment now in India. We must put the nation above all politics and strive to seek solutions to our challenges of jobless and unequal economic growth. These are massive challenges that need creative and consensual policy solutions. So, it is no longer about whether I was right or wrong about the impact of demonetisation.

I would have been happier had the economic impact was minimal, contrary to my earlier fears.

That is quite magnanimous of you. The government has subsequently come out with other objectives for its demonetisation exercise – like less-cash economy, digital economy etc. Surely, one cannot fault these goals, correct? How important are these as economic objectives for our nation?

We are a nation of small and medium enterprises. There are certain characteristics inherent in these small and medium businesses. They tend to be less organised, more informal and use cash as the primary mode of transaction. The underlying economic policy objective in our country should be to find ways to help these small businesses become larger which will then help us reap the efficiencies of scale economies. But we need to be able to achieve these objectives without any disruption to these small enterprises in their current form. Objectives such as a less cash or digital economy are laudable pursuits. But we also need to get our economic priorities right. It is unclear that these goals of cashless economy will indeed help small enterprises become larger and achieve scale efficiencies. That should be our priority. These small and medium enterprises are the backbone of India’s economy and labour markets.

It is unwise to sabotage this sector in some rhetorical pursuit of a digital economy.

Any behavioural change cannot be coerced or forced. It has to be nudged and incentivised, as behavioural economists have found. Digital or cashless economy is a mere post facto justification for what was fundamentally a flawed economic policy. They may be worthwhile objectives in themselves but perhaps misplaced in our current set of economic challenges and priorities for India.

So, you agree with the end goals of a digital economy but not the means to achieve those. If demonetisation had such a big negative economic impact, why do you think there is continued optimism on the part of foreign investors about India? Foreign investments into India remain very strong.

It is true that foreign investments remain robust. Both foreign portfolio flows as well as FDI have sustained strong momentum. This is perhaps reflective of the global investment environment. India has remained an attractive destination for foreign investment over the last decade, regardless of the politics of India. I am happy about that. This is a testament to the strong institutions of governance that guide and guard India. But that also means we must fiercely protect these institutions and safeguard their independence and credibility. That alone will ensure sustained long-term economic development of India.

Economic measures such as the Goods and Services Tax, demonetisation etc are touted as hard pills that India must swallow to formalise the largely informal economy of India. Is formalisation a necessary condition for economic growth, and if yes, what is the best way to achieve that?

Having said all this, it is very important for a nation such as ours to build strong state capacity to lift our standards of governance. This is possible only when we increase our share of tax revenues. If formalisation of the informal sector means widening of the tax base, it should be welcomed. But the means is as important as the ends.

Widening the tax base and formalising the economy cannot be achieved through coercion or threats or raids which can be counter-productive.

GST is certainly an idea in that direction to widen the tax base but the implementation of it is threatening to derail the informal sector entirely. Demonetisation was fundamentally a flawed idea, so any claims that it was a good idea that failed in execution is wrong. Arbitrarily withdrawing nearly 90 percent of all currency in circulation was not the means to achieve a more formal economy. It must be done through proper fiscal and monetary incentives.

You talked about the importance of institutions in a nation’s long-term economic development. Not just as a former prime minister but also a former RBI governor, what impact did the demonetisation decision have on the institutions of Indian policymaking and governance?

Institutions are of utmost importance in all democracies. Belief systems in societies are captured and enshrined through institutions. Institutions are the pillars that ensure orderly transition of powers and stability of a nation. Demonetisation was also an attack on the independence and credibility of the RBI as an institution.

The RBI was bypassed and overshadowed in one of independent India’s most significant monetary policy decisions.

This is a cause for concern. I am not for a moment implying complicity of the RBI and I am very sure that the RBI did not have a choice. I am equally confident that the governor of the RBI will strive to regain credibility and independence of the institution.

But I am very concerned about the creeping culture of erosion of institutions in other spheres. The Election Commission’s bizarre decision to not announce election dates for Gujarat along with Himachal Pradesh adds to one’s fears of erosion of institutional integrity. Institutions such as the Election Commission, the CBI, RBI etc. form the foundations of our democracy. I sincerely hope the leaders of these and other institutions will fight hard to preserve the independence and credibility of their institutions, for the sake of the future of our nation.

Demonetisation aside, as one of India’s senior-most statesmen, what do you think are the larger long-term challenges facing our nation today? How optimistic are you for the futures of hundreds of millions of youth of our nation?

The biggest twin economic challenges of our nation today are jobless and unequal economic growth. With hundreds of millions of youth entering the job market every year, it is imperative that we create productive jobs for all of them. Almost all our economic policy initiatives should be tailored to meet this core objective. We are not creating enough jobs for our youth.

Inequality is another big challenge. I have talked about inclusive growth in the past. We must never take our attention away from this.

A country of India’s size, complexity and diversity will not be able to tolerate high inequality for too long.

Research suggests that income inequality is rapidly rising. Add to this, your own recent research has shown increasing regional inequality across the different states of India. These are genuine challenges for any Indian leader. There are also no easy solutions to these challenges. At the very least, we must ensure we do not exacerbate these challenges through self-inflicted wounds such as demonetisation. We must pay equal attention to both the quality and quantity of economic growth and not get carried away by mere headline GDP growth numbers. My dream is to see a more equal, a more productive and a more prosperous India.

Praveen Chakravarty is Contributing Editor at BloombergQuint.
He is an economist, Senior Fellow at IDFC Institute and Founding Trustee, IndiaSpend.