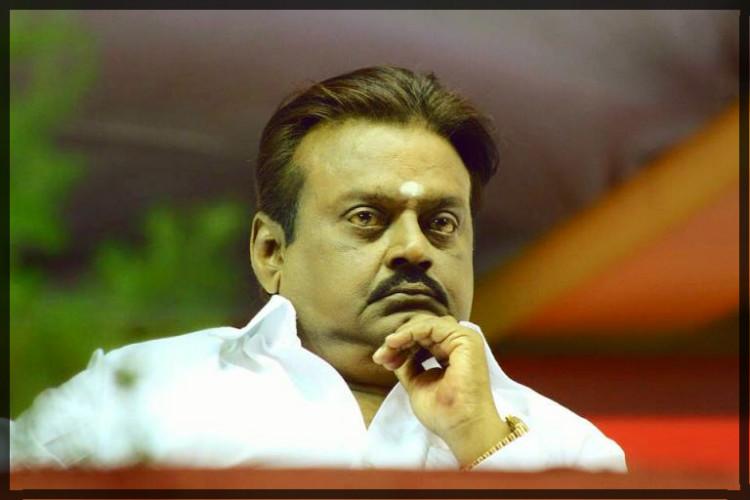 Vijayakanth, the leader of the regional party in Tamil Nadu, DMDK, recently announced his decision to lead a third front cobbled together by other smaller regional parties. This rainbow coalition claims to offer an alternative to the ruling AIADMK and its principal opponent, the DMK, in the upcoming state elections in Tamil Nadu. Subsequently, there have been allegations of offers of monetary and other rewards to Vijayakanth by the DMK and the BJP, which we are told, were spurned by the Captain, as Vijayakanth is popularly called. Amid this brouhaha, there is much curiosity among political observers over the impact of Vijayakanth’s decision on the political future of Tamil Nadu.

Tamil Nadu is perhaps one of the most fascinating case studies in India’s electoral democracy. It has predominantly been ruled by only three leaders, in a largely dictatorial fashion, over the last five decades (Karunanidhi, MG Ramachandran and Jayalalithaa). Its elections have primarily been bitter presidential contests between two larger-than-life, iconic leaders (Karunanidhi vs MGR, Karunanidhi vs Jayalalithaa), since 1971. All facets of Tamil society – bureaucracy, media, police force, citizens etc. – are divided sharply along the lines of the AIADMK or the DMK. Every incumbent party has been evicted to usher in the other, in six state elections over the last three decades. Every winning party has had an overwhelming majority, in a winner-takes-all outcome, that has now become a trademark characteristic of elections in Tamil Nadu.

Amid such powerful, dominating bi-polar forces in Tamil Nadu politics, one wonders why this “kolaveri” over an entire alphabet soup of smaller regional outfits such as the DMDK, VCK, PMK, MDMK etc. The answer is of-course, India’s incongruous first-past-the-post electoral system where splitting an opponent’s vote can be as rewarding as winning a vote for oneself. Will this Vijayakanth led third front play spoiler enough to wreak havoc in Tamil Nadu’s otherwise stable political landscape? Will this front adversely impact the AIADMK or the DMK more?

The DMDK has contested in four state and Lok Sabha elections in Tamil Nadu, since its formation in 2005. In the most recent 2014 Lok Sabha election, the DMDK led a coalition of the BJP, MDMK and PMK. It contested in 14 Lok Sabha seats, equivalent to 84 assembly constituencies. In 78 of these 84 constituencies, there was a direct contest among AIADMK, DMK and the DMDK. The DMDK’s adverse impact on DMK was 2.5 times more than its impact on the AIADMK vote share. In simpler terms, for every hundred votes for the DMDK, the DMK lost twenty five votes while the AIADMK lost just ten votes. Recall, the 2014 election was supposedly fought on a “Modi wave” that should have benefited the DMDK too, as its alliance partner. This analysis was repeated for the 2006 elections as well as the 2009 elections. Every time, the DMDK’s impact on DMK vote share was far greater than its impact on AIADMK. In the 2006 election, when the DMDK captured its highest ever stand alone vote share, it impacted the DMK vote share four times more than it impacted the AIADMK vote share. It is quite evident from this analysis that the DMK has far greater reasons to worry about DMDK than the AIADMK, which perhaps explains their nonchalance.

This analysis is of course backward looking and is not predictive of what will happen in the upcoming state elections. Nevertheless, voter behaviour follows a pattern and thus, this analysis merely answers the question – which party will be affected more by the DMDK? However, this also presupposes that the DMDK will capture a sizeable vote share to cause a meaningful impact. In another analysis, I have shown that the DMDK is no longer the force that it once was and its standalone state-wide vote share has dwindled from the 2011 high of 10% to 3%-5% currently. So, all this noise over which party will be affected more may well be moot, if DMDK continues its rapidly declining trend.

(Chakravarty is a Fellow in Political Economy at IDFC Institute, a Mumbai based think-tank. Views are personal.)