The sign of the times is: National parties out, alliances in

State elections are accorded importance in the ‘nat­ional’ media for one primary reason—to be able to discern trends for the next national election. The next Lok Sabha elections is in 2019. In this context, what do the results of the four states (leaving aside Pondicherry) that went to polls recently portend?

Clearly, both lost more assembly seats to regional parties in these four states between 2014 and 2016. This is perhaps the biggest takeaway for the 2019 Lok Sabha election. Notwithstanding the English media’s obsession with national parties, it is indubitable that the significance of the national parties continues to wane. 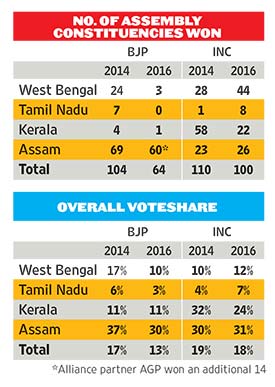 The Congress contested in 55 per cent fewer seats in these state elections compared to 2014, largely driven by its new alliances with the DMK in Tamil Nadu and the Left in West Bengal. Interestingly, it won more seats in three of the four states in 2016 compared to 2014, albeit on the back of these alliances. But bettering an overall abysmal 2014 performance is no creditable achievement. The Congress’s overall average voteshare in 2014 was 19 per cent, down to 18 per cent now.

The 12 largest states account for more than 80 per cent of Lok Sabha seats and matter most in national elections—UP, Maharashtra, West Bengal, Bihar, Tamil Nadu, Andhra Pradesh (united), Madhya Pradesh, Gujarat, Karnataka, Rajasthan, Orissa and Kerala. The BJP’s 2014 victory was entirely on the back of six of them. It won 80 per cent of its Lok Sabha seats from the six ‘Hindi’ states—Uttar Pradesh, Bihar, Rajasthan, Gujarat, Madhya Pradesh and Maharashtra, winning 90 per cent of all seats. In the other six states, the BJP won only 20 per cent of all seats. So it was imp­erative for the BJP to hedge its dependence on the ‘Hindi’ states for the 2019 election and expand its presence into other large states. In that context, the BJP should be disappointed with its 2016 electoral performance. It has failed to widen its footprint in West Bengal, Tamil Nadu and Kerala, which together account for 100 Lok Sabha seats.

This is not about national versus state elections. There is enough evidence to show voters do not differentiate between the two, contrary to the popular narrative that they do. Increasing voter disenchantment with the national parties carries through state and national elections. The question then is not one of Congess-mukt Bharat or BJP-mukt Bharat but an Alliance Bharat.

(Chakravarty is a Fellow in Political Economy at IDFC Institute, a Mumbai-based think-tank)