India’s top 5% today earn as much as the remaining 95% combined. 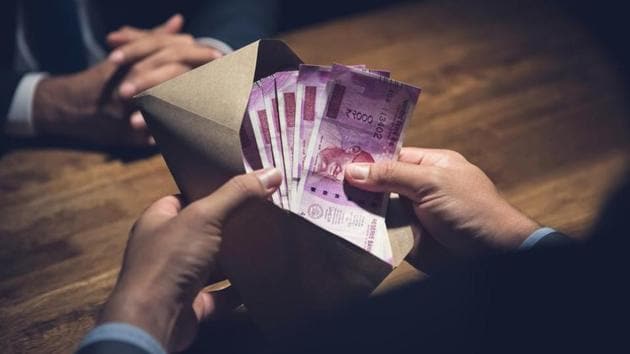 India is experiencing the twin shocks of high levels of income inequality and a rapidly widening pace of such inequality.(Getty Images/iStockphoto)

A recent newspaper column claims the phenomenon of rising income inequality in India is a myth and free of evidence.

The column should have ideally been ignored, had it not been written by a member of the Prime Minister’s economic advisory council, presumably an important economic policy body in the country.

The crux of the column’s argument is that there is no evidence to show income inequality has been rising recently, because the last income distribution survey done in India was back in 2004 and that subsequent surveys only captured consumption data and not income.

The Central Board of Direct Taxes (CBDT), aka the Income Tax department, has made available, detailed income distribution data of roughly 50 million income tax filers for every year from assessment year (AY) 2013 to 2016. The CBDT dataset contains actual income distribution details of Indians across 21 categories of income levels such as, annual income less than Rs 1.5 lakh, income between Rs 1.5 to Rs 2 lakh, Rs 2 to Rs 2.5 lakh and so on, up to income greater than Rs 500 crores. This dataset gives the total number of people that earned annual incomes in each category of income level. 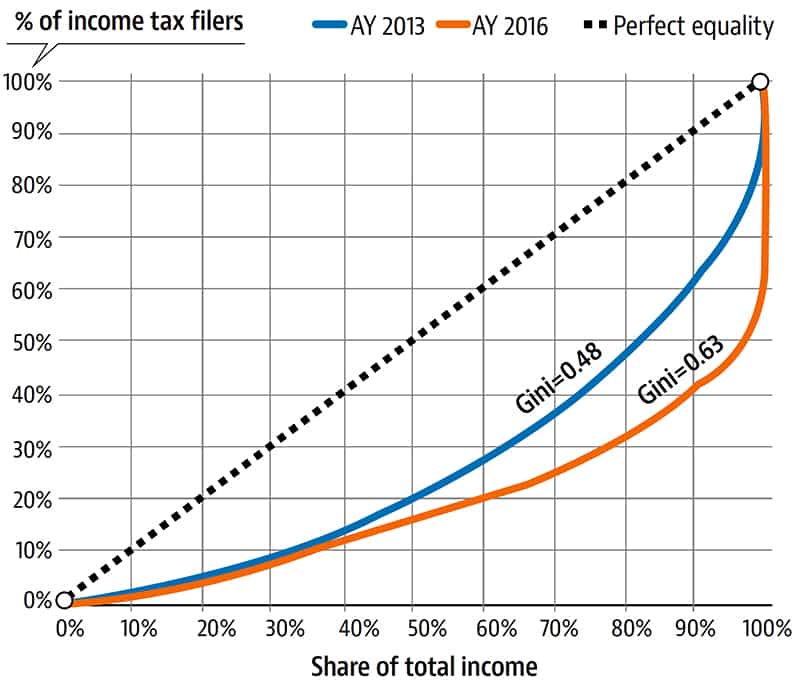 For instance, while there were 273 people that earned more than Rs 500 crores in 2016, more than half of all income tax filers earned less than a mere Rs 3.5 lakhs.

And, these 273 people accounted for one-fifth of all combined income of the nearly 50 million taxpayers in 2016. With this dataset, it is possible to calculate what percentage of people earned what percentage of the total income in a given year. Gini coefficient, the globally used statistical measure of income inequality, is typically derived using such income distribution data.

Hence, it is possible to calculate the broad Gini coefficient for India’s taxpayers too, using this CBDT dataset. Surely, it is then possible to glean insights on recent income inequality trends from this dataset?

Analysis of the CBDT dataset reveals that the Gini coefficient for India in 2013 was 48, and rose to 63 by 2016, a 15 percentage point jump in just three years.

A Gini of 0 means perfect equality and 100 means absolute inequality. To put this in context, Gini varies from 25 to 40 for OECD countries. Gini for China is believed to be around 50. By these standards, India is among the most highly unequal countries in the world.

India is experiencing the twin shocks of high levels of income inequality and a rapidly widening pace of such inequality.

These findings are based on publicly available income data of roughly 50 million taxpayers, released by the income tax department. This should have ideally neither been revelatory nor new. If this is not evidence of high levels and rising trends of income inequality in India, then what is?

Yet, opinion pages are filled with narratives about how there is no evidence of India’s inequality and that, all past findings are unreliable since they are based on consumption data and not income data.

Most of these narratives suffer from cognitive dissonance and rigid economic dogma. I have shown in my recent work using corporate wage distribution data that income inequality is equally high between top executives and the average worker in corporate India. This notion that there is no concrete evidence for high and rising income inequality in India is nonsensical.

There can, of course, be differing opinions on the causes of such high income inequality and policy measures needed to tackle them. But it is entirely foolhardy to believe that inequality is either not high or not rising rapidly or is not a problem in India.

The stubborn few may still contest these findings from the CBDT dataset on grounds that this data represents only 50 million Indians and not the entire population. These 50 million taxpayers are presumably among the highest income earners in India. It will be silly to argue that all of the remaining 800 million adults are also high-income earners who are simply dodging income taxes and thus, left out of this dataset which skews the Gini calculations.

To be sure, this is not about politics or economic policies of one government versus the other. India has been experiencing rising income inequality for more than a decade.

High and rising income inequality is a terribly worrying phenomenon that transcends politics. It is perhaps the nature of contemporary economic development models and excessive financialisation that exacerbate inter-personal income inequality. It is critical for policymakers to acknowledge and accept this phenomenon than defiantly bury their heads in the sand.

(Chakravarty is chairperson of Data Analytics department of the Congress party. Views expressed are personal)