Never in my wildest dreams did I think I will be standing here in front of you”—N.R. Narayana Murthy, co-founder of Infosys Ltd, told reporters on Saturday, 1 June 2013, immediately after the decision of the board to re-appoint him as chairman of the company, two years after his retirement. Only, this was apparently not as wildly unanticipated as Murthy had alluded.

One 31 May, a day before the announcement, roughly $70 million (nearly ₹ 350 crore) of Infosys stock changed hands on the National Stock Exchange and BSE. Ranbaxy Laboratories Ltd announced on Saturday, 6 April 2014, that its board had, moments ago, approved a merger with Sun Pharmaceutical Industries Ltd. Only, between 2-4 April, three days before the board approval of the merger, nearly $200 million ( ₹ 1,000 crore) were already wagered on the stock exchanges on this transaction. On 20 November 2014, after the end of trading on local exchanges, Kotak Mahindra Bank announced its acquisition of ING Vysya Bank. Again, some $100 million ( ₹ 500 crore) was already bet on the stock exchanges over the previous 15 days on this information. These numbers are not official data but estimates based on analysis of trading patterns and computing the incremental trading value in each of these stocks during that particular time period, after normalizing for overall market volume and all other new information, if any. In other words, this was the additional amount of trading in each of these stocks purely on the material, price-sensitive information of management change or a merger.

That the equity markets are dominated by handful of speculators and operators is a common refrain among most Indians. When the beacon of corporate governance and a much adored company such as Infosys is subject to rampant insider trading on news such as the return of Narayana Murthy, a decision that ostensibly only the board members and select few are supposed to be privy to, unlike a merger, it is easier to empathize with the feeling of distrust about the stock markets.

The charts represent trading patterns and stock price movements from 10 days prior to the date of announcement of new information to six days post the announcement in each of these three instances. 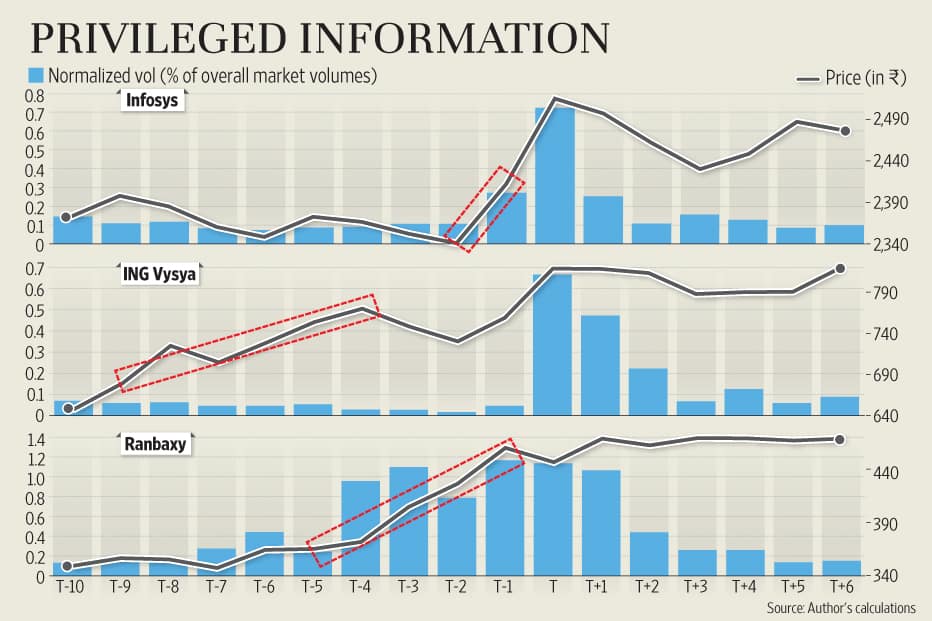 The $70 million bet in Infosys, a day before the announcement netted a gain of $5 million, based on a stock price appreciation of 3% in one day. Similarly, the $200 million bet on Ranbaxy on the back of the insider tip of a deal with Sun Pharma was worth a gain of $50 million (24% jump in three days) and more recently, the $100 million wagered in ING Vysya stock before the deal with Kotak Mahindra Bank resulted in a windfall of $25 million (26% jump in 10 days). Handsome and easy payoffs for a select few with privileged access to information. This is certainly not to insinuate that company management are the ones guilty of trading in each of these three instances. “Insider” refers to any individual that is in possession of non-public, price-sensitive information. To be sure, such trading anomalies in these three stocks is neither a stunning new revelation nor is lure of easy money on hot insider tips unique to the Indian capital markets. But the karma free nature of it is.

Amidst such blatant and rampant insider trading in multi-billion dollar blue-chip companies, it’s easy to fathom why “rigged” and “manipulated” are the most often used adjectives to describe India’s equity markets by the common household saver. Yet mutual fund pundits and industry bodies seem puzzled over why retail investors and the board of trustees of Employee Provident Fund Organisation shun the equities markets, citing lack of trust. While stock exchanges and market participants indulge in hollow revelry over five-fold growth in the Sensex in the 21st century, it is abundantly clear that the average Indian does not part with her savings to equity markets and this Sensex growth is fuelled entirely by foreign investor flows. In the 21st century, for every incremental ₹ 100 of GDP added, ₹ 18 have been added to savings bank deposits, ₹ 8 in gold and a mere ₹ 1.5 in equities. Repeatedly cajoling and exhorting Indian savers to save in productive financial assets away from under mattresses and gold is merely flogging a dead horse. Recognizing the immense trust deficit in asset classes such as equities and taking steps to bridge those would be a more prudent way to channelize India’s large household savings to more productive uses.

While the Securities and Exchange Board of India (Sebi) has been cognizant of this and proactively announced new and well thought through insider trading rules recently, it is not lack of rules that is the problem. It is the rigorous enforcement of it. The need to name, shame and punish the guilty is imperative to cleanse our markets and rebuild trust. Sebi with its scanty resources justifiably finds it hard to investigate insider trading cases that usually demand meticulous data collection, analysis and building a cogent case. There is need to build capacity in Sebi, both in terms of numbers and skills to be able to effectively enforce insider trading laws. Perhaps, some of this capacity building can be proxied through the stock exchanges that also have a regulatory role to play to curb insider trading by their broker clients. Celebrations of market capitalization touching some inane milestone aside, let’s aim to restore trust in equity markets for the average saver and bring back pillow savings to companies that can use it to generate jobs.

Praveen Chakravarty is a former chief executive officer of an investment bank.