US has no moral rectitude to deliver ethical sermons. But regardless, India must take a holistic view in purchasing oil from Russia—it’s not a rosy picture. 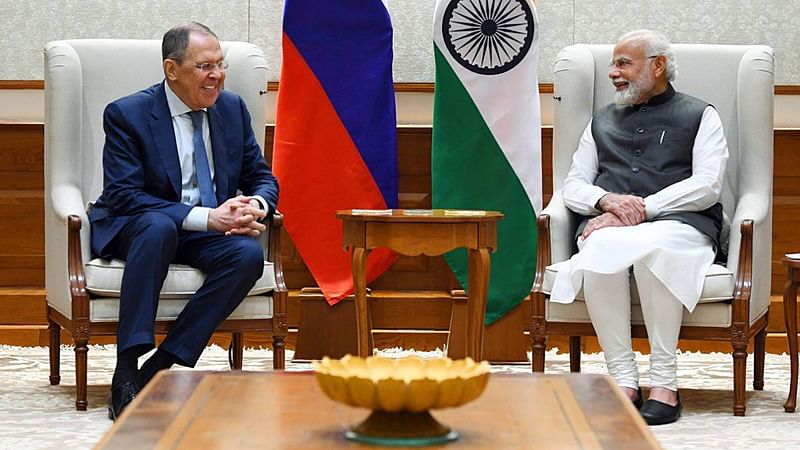 Don’t take advantage of the pain and sufferings of Europeans and Americans — warned the United States to India last week. It was in the context of India’s purchase of discounted Russian oil that purportedly abets Russia’s war against Ukraine. India now purchases 10 times more oil from Russia since the Ukraine conflict began, retorting that it is acting in its ‘best economic interests’. The US cautioned that India’s ‘war profiteering’ may trigger secondary sanctions.

Before the Ukraine conflict began, the world was buying 10 million barrels of oil every day from Russia. Soon after, the Western bloc of European and North American nations imposed severe economic sanctions against ‘autocratic’ Russia’s oil, foreign reserves, currency, trade and payment systems in the hope that its resources could be drained and it would be forced to end the conflict. After four months of sanctions and nearly 10,000 deaths and injuries, Russia is still able to sell eight million barrels of oil every day, primarily to Asian countries including India, that helps to fund its continuing war in Ukraine.

Is Gandhi’s India being morally frail in helping Vladimir Putin’s Russia kill innocent Ukrainians as the Americans allege? Perhaps, but in this particular case, America’s moral standing is as slippery as Russian oil in lecturing other nations, and India’s purchase of Russian oil is a ‘rouble wise rupee foolish’ strategy.

“I will make them pay a price and treat them as the pariah they are,” declared US President Joe Biden about Saudi Arabia in November 2019 during the presidential election campaign. Biden was castigating the Saudi rulers for masterminding the abduction and killing of dissident journalist Jamal Khashoggi and vowed to ostracise Saudi Arabia when he became president.

In March 2022, when oil prices soared to a two-decade high due to the Russian sanctions, President Biden reversed course and attempted to speak with Saudi Arabia Crown Prince Mohammed Bin Salman to increase Saudi’s oil production to reduce global oil prices. The latter refused to take his call, apparently in retaliation to the ‘pariah’ description.

Oil prices continued to soar, and inflation in Western nations hit multi-decade highs. America’s moral swagger with Saudi Arabia not just impacted people in Western nations but also completely ruined the small nation of Sri Lanka, 15,000 kilometres away, where massive fuel shortages erupted into violent protests and plunged the lives of 22 million people into chaos and ruin. It showed how, in a precariously inter-connected world, one nation’s scruples can be another nation’s calamity.

Now with mid-term elections looming, declining popularity ratings and rising economic misery for Americans, President Biden is scheduled to pay a personal visit to ‘pariah’ Mohammed Bin Salman in Saudi Arabia to plead with him to increase oil production and assuage Americans’ gas station miseries. After tipping the entire global economy into the doldrums by imposing sanctions against ‘autocratic’ Russia, Biden is now looking to strike a deal with another ‘autocratic’ nation to give his party a fighting chance in the November mid-term elections. America has no moral rectitude to deliver ethical sermons to India or any other nation.

Why ‘cheaper’ oil is a mirage

Regardless of America’s moral chastity, it is still important for India to weigh all economic, social, geopolitical and ethical considerations in its decision to purchase discounted oil from Russia. The proposition that buying cheaper Russian oil is in its best economic interests may well be a mirage when analysed holistically.

Normally, most of India’s external trade is primarily invoiced and paid for in US dollars, which is the world’s dominant reserve currency. But due to economic sanctions, Russia’s access to US dollars is curtailed, and hence, it demands payment for its oil in roubles. But the true market value of the rouble is indeterminable since it has stopped trading actively in the global currency markets.

So, if India has an offer from Russia to buy oil, at say, $80 a barrel when the global price is $130 a barrel, it has to convert those $80 into roubles based on some offshore market rate and pay Russia to take delivery of the oil. With no established market value for the rouble, how can India be sure that it is indeed buying Russian oil at a cheaper price and at how much of a discount?

It is plausible that just as in the 70s and the 80s, India has established a rupee-rouble bilateral currency arrangement that agrees to a mutual value. So, when India pays Russia in rupees for its oil purchase at this mutually agreed-upon value, the latter can use those rupees to pay for goods that it buys from India. Except, India buys twice as much from Russia as Russia does from India, making it a lot more complicated.

Once the bilateral currency window is opened, what is to then prevent China from pressurising India for future trading in yuan, given it’s the Chinese’s cherished desire to dislodge the ‘exorbitant privilege’ enjoyed by the American dollar? And if India is forced to succumb to China, it will then revert to the discredited era of disparate, isolated trading relationships through bilateral currency arrangements that prevailed four decades back. Any departure from the current world order of US dollar-based trading settlements and multilateral trade agreements will jeopardise India’s huge opportunity to be a global trading powerhouse that can unleash economic prosperity for hundreds of millions of Indians. In essence, buying ‘illusory’ cheaper oil from Russia under an opaque bilateral currency arrangement with a risk of impairing external trade, in the long run, is certainly not in India’s best economic self-interest as it has been made out to be.

To the hazy economic benefits, add the ethical dilemma of buying ‘Russian blood oil’. Virtues and ethics matter, as even the celebrated champion of the ‘economic self-interest’ doctrine Adam Smith wrote: “Man naturally desires, not only to be loved but to be lovely”. It may be tempting to dismiss this as an idealistic, academic idea but Smith’s postulation was that “being lovely” (being virtuous) makes good economic sense in the longer run. There may well be a situation in the not-too-distant future when India is under attack by China and looks to the world for help and sanctions. India’s actions today can shape the turn of events for that eventuality, should it occur. Or Russia’s war with Ukraine may end suddenly and leave India holding its oil can to the chagrin of the West.

Beyond all these, there is also the looming threat of secondary sanctions by the Western bloc of nations due to India’s purchase of Russian oil. Although it may well be a hollow and a symbolic threat, when it is evident that ‘cheaper’ Russian oil is not in India’s economic self-interests as it is purported to be, then is it even worth antagonising the West further?

India’s decision to buy cheaper Russian oil seems to be equally driven by a nationalistic urge of a strong nation sticking it to the West and calling out their duplicity. “If it is you, it is yours but if it is me, it is ours,” said India’s foreign minister S. Jaishankar recently, referring to the Western nations’ hypocrisy about India’s oil purchase from Russia. By all means, India must expose the West, but it may be a foolish pursuit to buy Russian oil under a sole nationalistic impulse to spite it.

This year’s current account deficit cannot be the sole determinant of India’s decision to buy Russian oil. Buying it ‘cheap’ is neither in India’s best economic interests in the long run nor its best geopolitical interests and worse, bloodies India’s hands in the Russia-Ukraine conflict. Acting wisely and mature by eschewing short-term gratification of flexing nationalistic muscles through the purchase of Russian oil, India can be the future beacon of a liberal, ethical, democratic, and economic power in the world.