India’s ‘simplified’ tax scheme is anything but simple

Twenty-nine disparate states are now working under the same, centralised Goods and Services Tax, but most seem ill-prepared for the tidal wave of economic disorder it seems likely to bring

An Indian labourer in New Delhi loads a cart to be delivered ahead of the implementation of the Goods and Services Tax. Photo: AP

In 2011, the chairman of the Federation of Indian Chambers of Commerce and Industry, India’s leading business association, publicly pleaded with the then chief minister of the state of Gujarat to “soften his opposition and accept the implementation of the Goods and Services Tax (GST) in the larger national interest”. The chief minister of Gujarat in 2011 was Narendra Modi.
Now the prime minister, Modi has had a change of heart, launching the GST regime throughout India in his characteristically ostentatious style, at a midnight event at the Central Hall of the Parliament of India – the same venue and time when India declared independence from the British 70 years ago.
In a short span of six years, Modi has gone from being the one-man roadblock to the GST to celebrating its launch in the grandest manner since Indian independence in 1947. 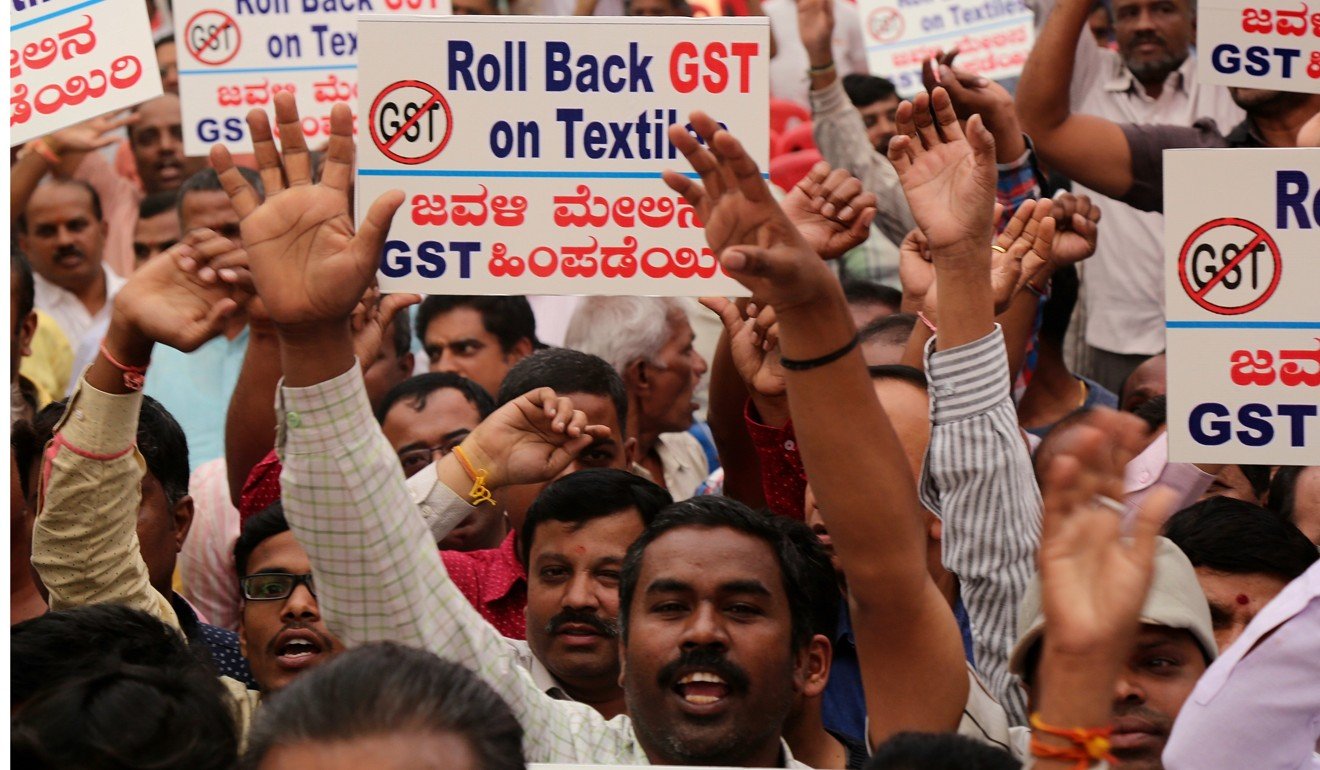 A protest against the Goods and Services Tax in Bangalore, India. Photo: EPA

India’s GST initiative is a mammoth exercise in fostering a tax union across all its 29 states. Previously, each state levied its own taxes and surcharges.
The GST aims to implement five uniform tax rates across all of India. The idea is that a simplified tax structure will reduce friction and boost interstate trade and commerce, providing a fillip to the overall gross domestic product.
The idea is powerful and has been in the works for more than a decade. But India’s incredible scale and diversity also makes this project one of its most challenging. It requires every state to surrender its fiscal powers of taxation. A new GST Council was created, with representation from each state, to determine individual tax rates for thousands of goods and services.

What makes this a monumental challenge is India’s 3-3-3 paradox – the three richest states are three times richer than the three poorest states. Economic disparity in India is at its peak.
Smartphones may be a luxury good in a poor state such as Bihar, but a necessary good in a richer state such as Tamil Nadu. So, should smartphones be taxed at 28 per cent as a luxury good or at 15 per cent as a necessity across all of India? Questions such as these for every good and service had to be deliberated and agreed upon by the council. Indians shop in New Delhi before the new Goods and Services Tax scheme kicks in, which could increase prices. Photo: AP

Just four states contribute as much tax revenues as the remaining 25 states combined. The average age of a person in a poor state is 19; in a richer state such as Kerala, it is 31.

One-third of India’s population is governed by political parties that have a presence in only their home state. The economic, social, demographic and political diversity of India is starker than that of the nations that form the European Union. To forge a common tax union across such enormously disparate states requires extremely meticulous preparation in terms of people, policies, institutions and back-end systems. On this count, India is woefully underprepared.

Eight million businesses in the tax network will need to re-register under the GST. They will have to file three tax returns every month and one annual return.
Over and above this, there are 50 million other small- and medium-sized businesses, which in total employ more than 120 million people, that are currently not registered on any tax network but will have to register under the GST if their annual revenues exceed US$30,000. A Bangladeshi tourist couple walk past closed shops during a strike against the nationwide Goods and Services Tax in Kolkata, India. Photo: AP

Many of these businesses may not be able to cope with the extra costs of taxation. If many shut down, it can have a catastrophic impact on jobs and employment, which is already a burning issue in India.
There is still confusion regarding tax rates for many goods and services, from software to used hybrid cars. Since the current version of the GST strayed from the original principle of just one tax rate across all goods and services, room remains for arbitrage and tax abuse due to different rates for different categories.
For example: is an ice-cream sandwich to be taxed as an ice-cream or as a sandwich? The answer impacts how much tax is owed. 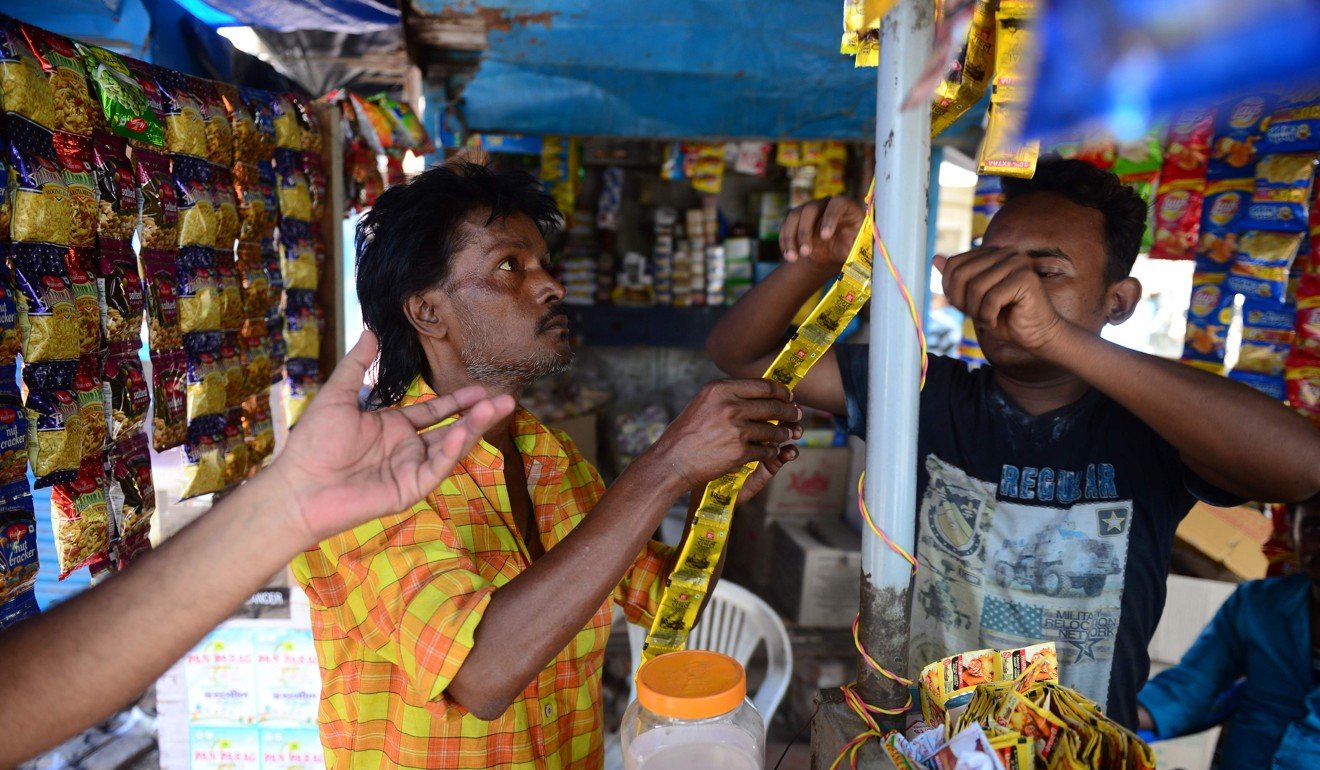 An Indian customer buys Gutkha Pan masala at a shop in Allahabad.The long-awaited goods and services tax is rolling out, even as businesses complain they are ill-prepared for it. Photo: AFP

There are also reports that the back-end technology for the GST network, which will need to process nearly 5 billion transactions a month, is not yet ready. Some states have not even ratified the GST bill in their legislatures. In short, India is not ready for the GST, though it is now in a GST regime.
In the perpetual quest for public glory that seems to be the sole motivation for the government, India has implemented an ill-prepared GST. To be sure, no nation can be fully prepared for such a massively complex initiative. But with a 100 per cent political consensus on the GST as a concept, and with no impending urgency, the hastiness to usher in a half-baked GST regime is inexplicable.
Midnight celebrations aside, India will have to confront the tumultuous realities of a potential near-term shock to the economy due to the GST and the adverse trickle-down impact on jobs and careers for hundreds of millions of youth.
But then, for India’s government, the global publicity that can be gained from “bold reforms” far outweighs the cost of human suffering, as its disastrous demonetisation policy proved. ■
Praveen Chakravarty is a senior fellow at the IDFC Institute, a Mumbai think-tank