Has 70 Years of Redistribution From Rich States To Poor States Worked?

The previous Noise to Signal column explained how just a handful of India’s states contribute almost all of the resources for ‘nation building’. It showed how the four states of Maharashtra, Gujarat, Tamil Nadu, and Karnataka contribute most of the tax revenues to the Centre while the four states of Uttar Pradesh, Bihar, Bengal, and Madhya Pradesh receive the most finances from the Centre. For every Rs 100 as tax revenue to the Centre, Maharashtra gets back only Rs 15 while Bihar gets back Rs 400. This difference is the starkest of all among large countries in the world. In the United States, for example, for every $100 paid as tax revenue, New Jersey gets back $60, the least of all the fifty states while New Mexico gets $200, the highest.

Redistribution from rich to poor states is true for all major countries in the world. This is to enable poorer states to get rich and narrow the gap with the richer states. Such redistribution enables nations to experience what economists call “convergence”, i.e. the gap between richer and poorer states becoming smaller over time.

So, has decades of such redistribution from rich to poor states of India helped achieve such convergence?

Using the same set of eight states – Bengal, Bihar, Gujarat, Karnataka, Madhya Pradesh, Maharashtra, Tamil Nadu and Uttar Pradesh, let us compare progress indicators over five decades (1960 to 2014) to determine if the gap between these states has indeed narrowed. A simple set of four indicators – per capita income, literacy rate, median age and life expectancy – measure both economic and social progress. In general, these indicators are also related to each other as one can expect people in a rich state to be more educated and live longer.

How Much Do They Earn?

The gap between Bihar and Maharashtra in per capita income has increased and not decreased. Overall, the four richer states earned 1.5 times as much as the four poorer states in 1960. Today, they earn three times more, indicating that the gap has widened. Clearly, the economic gap between rich and poor states has more than doubled since 1960. 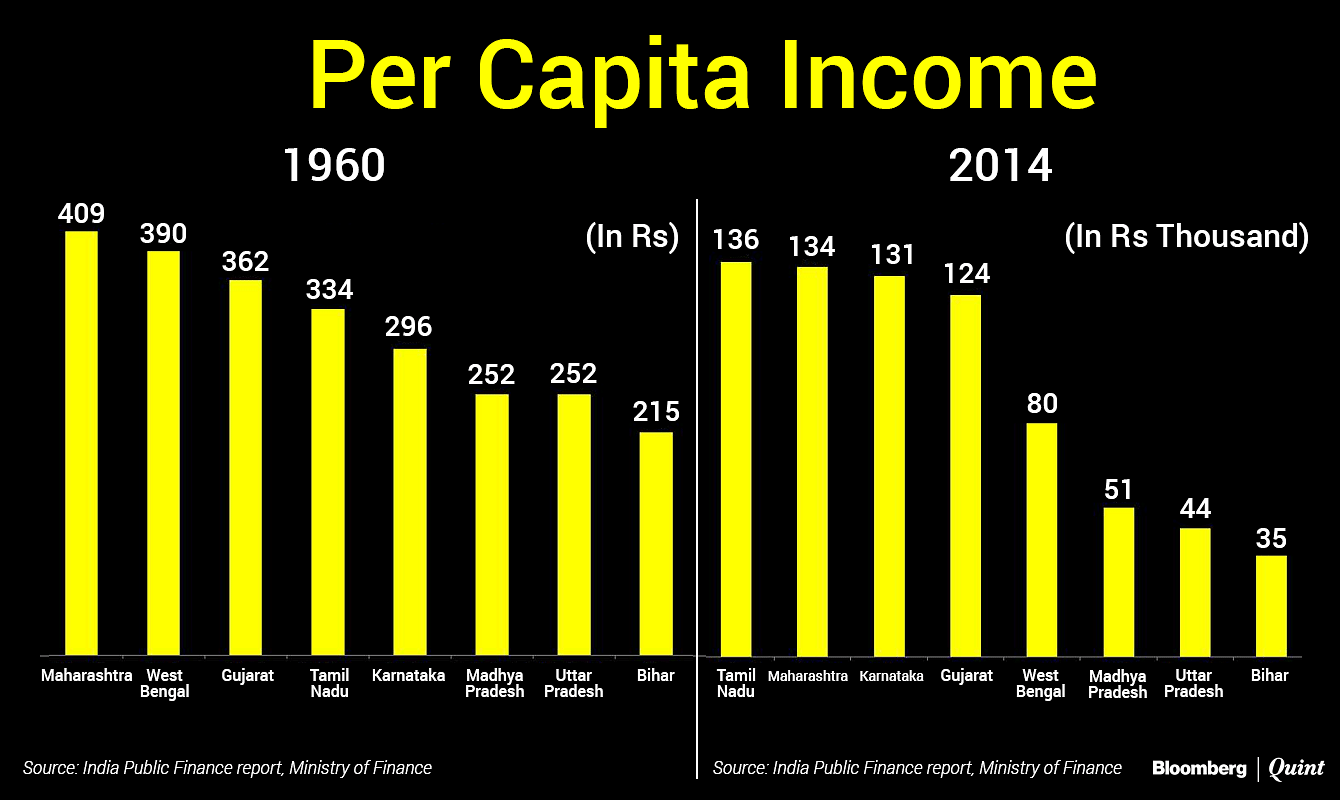 Is All Of India Still ‘Young’?

For all that talk about India being a young country, it depends on which India one refers to. 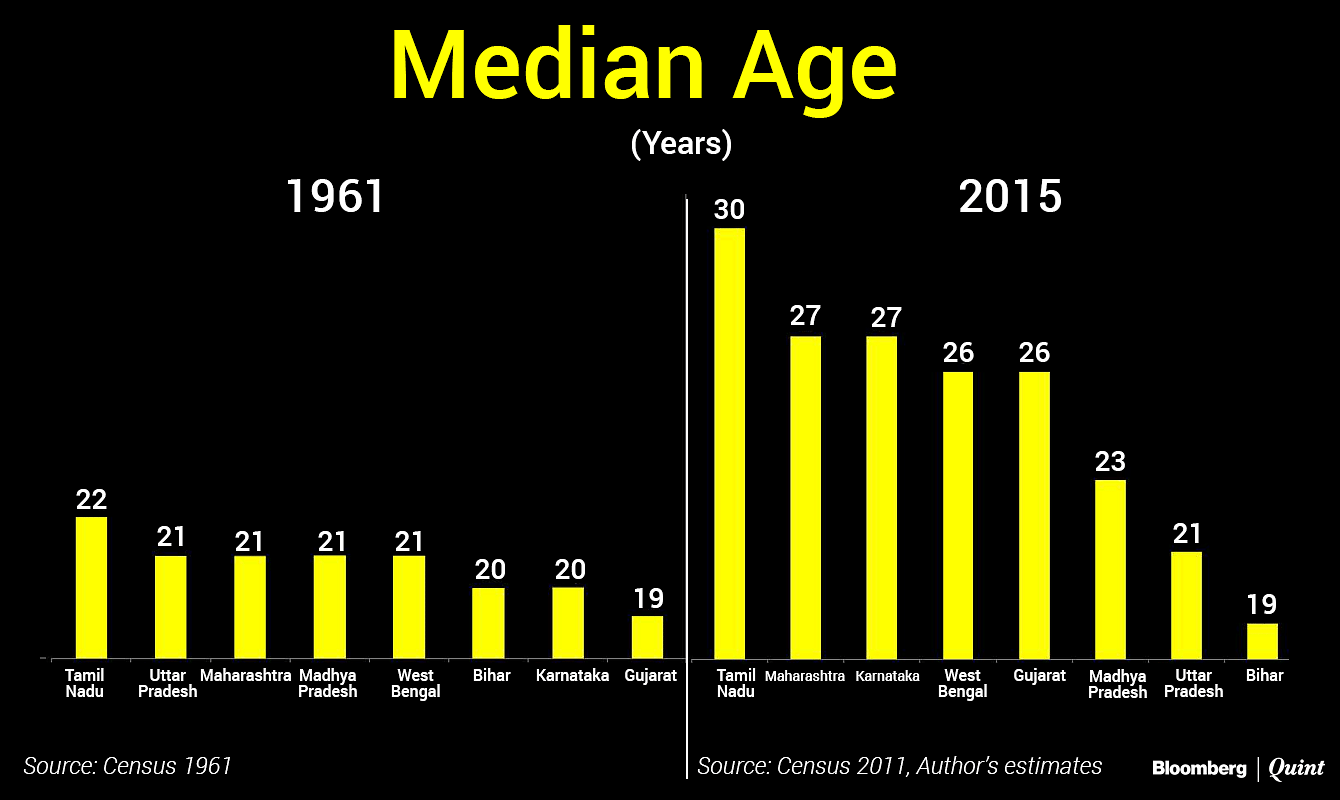 Here again, the gaps remain as-is. After five decades of economic progress, one would have expected all states, rich or poor, to be equally literate but that is not the case. Living Longer In The Rich States 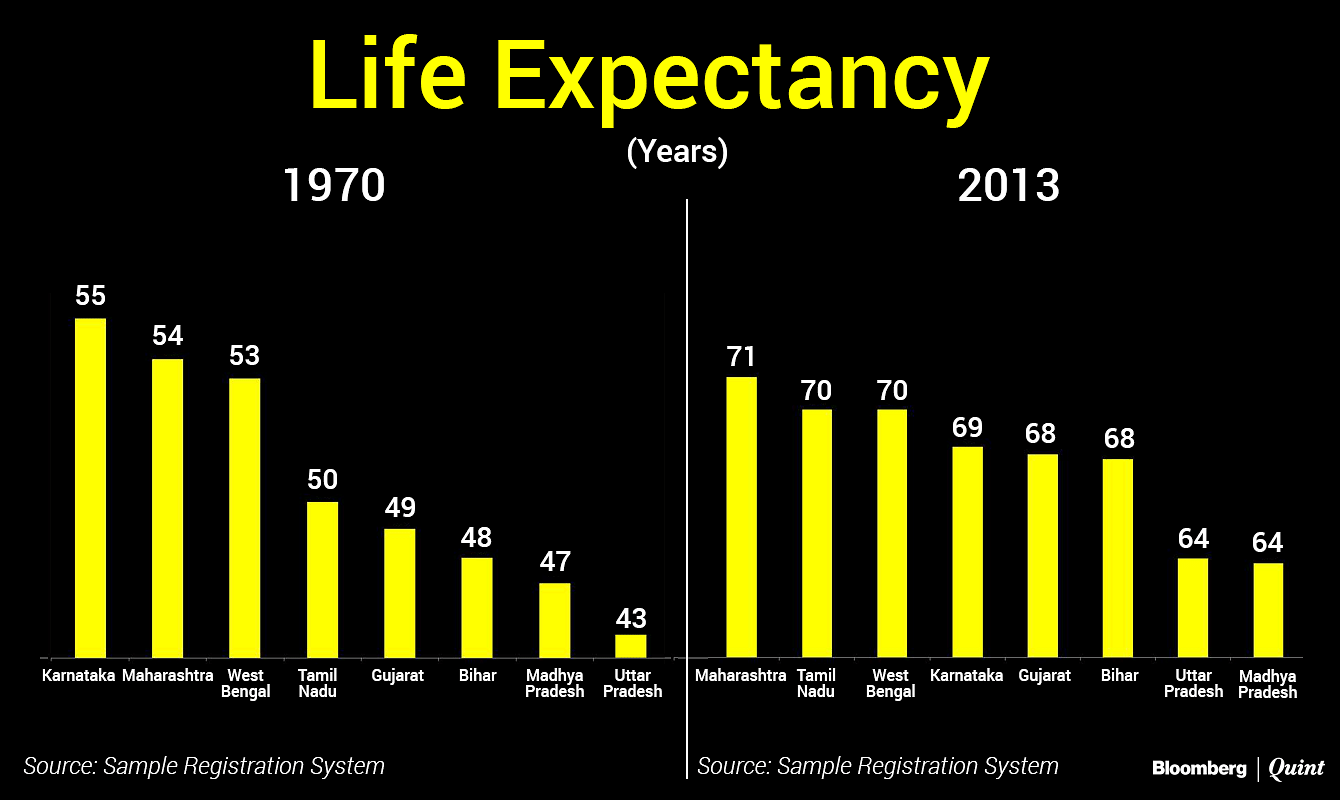 As this gap continues to widen, the burden on the four rich states to support the remaining states will only keep growing.

The richer states will soon have to worry about their own ageing population and providing for them. This will place increased demands for resources for their own states. If even after five decades of redistribution from rich to poor states, it has not helped close the gap, it is only right to ask if such redistribution should continue unabated and untied. Given that the poorer states account for two-thirds of all Lok Sabha seats, there will always be a temptation for the political class to continue to redistribute from richer to poorer states without any accountability. How long can this political pandering to the vote base of the poorer states with the resources of the richer states continue? What should the measure of success be for such redistribution? All these are legitimate questions and not against the “idea of India”. It is important that such questions are asked and answered openly than hiding behind a veil of false nationalism and unity.

The author thanks V Anantha Nageswaran for feedback and data on international comparisons and Malini Kohli for research assistance.