Exactly why did the BJP suffer such a brutal reversal? 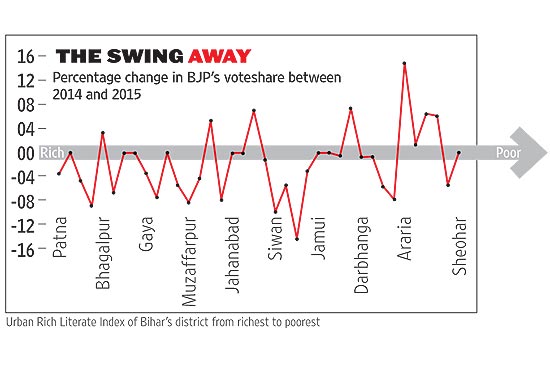 The common wisdom is that I will win in the next election but I don’t believe that. I think it is going to be the economy,” confided George H.W. Bush in March 1991 to his chief of staff aboard Air Force One, returning from a victorious war in Iraq, according to a recent biography. He went on to lose to Bill Clinton, who went with the punchline, “It’s the economy, stupid.” Now, imagine if Prime Minister Narendra Modi, returning from a euphoric meeting with Silicon Valley stalwarts, had mused, “Common wisdom is that I’ll win the Bihar elections, but I don’t believe that. It’ll be about internal dissonance, not my global stardom.” He would have been just as oracular.

Because, in the recent Bihar state election, a sizeable number of BJP voters switched loyalties. The BJP faced the ire of voters in Bihar who seemed entirely oblivious to our PM’s rise up the charts of Forbes’s list of the ‘World’s Most Powerful People’. BJP spokespersons and supporters wax eloquent about the “index of opposition unity” and alliance arithmetic of the Grand Alliance as the sole protagonists. That argument completely misses the point that there were a significant percentage of erstwhile BJP voters who deserted the party in the current Bihar election. There were 19 million voters across 129 constituencies in Bihar (where the BJP had served up candidates in both 2014 and 2015 elections). Of these, 7.8 million chose the BJP over all the other parties in 2014. In the 2015 election, only 7 million voted for the BJP in these constituencies. Thus, nearly 8 lakh BJP voters from 2014 changed loyalties in 2015. Whether the opposition was united or not is irrelevant here, since voters had the exact same choices in 2014 and chose the opposite. This represents a voteshare decline of some four per cent, a significant swing in 18 months, while it’s common to experience five per cent anti-incumbency swings after five years! The BJP lost voteshare in 90 of these 129 constituencies, indicating widespread disenchantment. Using census data, we ranked districts in Bihar according to a URL index that we computed—urban, rich and literate. We then mapped electoral data and census data to glean insights from these shifting voting patterns for the BJP in Bihar. This analysis relies entirely on voteshare since that is a direct manifestation of the average voter’s choices than seat shares. Patna has the highest URL. Here, the BJP had a 3.5 per cent loss in voteshare. In Banka district, which ranks among the lowest in the URL index, the BJP gained 6.3 per cent voteshare compared to its performance in the 2014 elections. The BJP lost more votes in urban, rich and literate districts than in other districts. It lost more votes in districts with greater percentage of youth than the rest, and in districts with the least Muslim population than in districts with many Muslims.

The surprising finding is that in the top five districts according to the URL index, the BJP lost 14 per cent voteshare, while in the bottom five districts, it gained a six per cent voteshare. Even more surprisingly, in the four districts that account for 70 per cent of all Muslims in Bihar, the BJP gained 5.5 per cent in voteshare compared to the 2014 elections. The BJP has gained voteshare in Muslim constituencies, while it lost much of its traditional base among the urban rich. The BJP’s “celebratory fireworks in Pakistan” campaign in the last phase of the election, during which these Muslim heavy districts went to polls, may have served a limited purpose. But the rest of Bihar rose up in protest against the BJP. Thus, a net overall loss of four per cent voteshare for the BJP is actually a loss of ten per cent among its 2014 supporters and a gain of six per cent in Muslim-heavy districts. The inconvenient truth for the BJP is that “opposition unity” is a mere alibi. Far too many voters supported the BJP in 2014 but turned later. Elucidating the reasons for this is best left to our political pundits and the BJP leadership.

(Chakravarty is a Visiting Fellow in political economy at the IDFC Institute, a Mumbai think tank and founding trustee of IndiaSpend, India’s first data journalism initiative. With help from Rithika Kumar and Swapnil Bhandari at IDFC Institute.)